The essence of traditional Chinese brush painting is its simplicity.

The composition is always understated in that the painter only provides the main essentials of the picture, leaving the viewer to imagine the rest in the large areas of space which are so much a part of the oriental concept. For example, since it is obvious that flowers grow in soil or grass, there is no need for the painter to show it in the picture.

Flowers and trees are depicted in a limbo, giving the impression that what is actually seen is only a small part of a vast natural panorama. This impression is deliberately accentuated by the Chinese tradition of mounting the paintings with very narrow sides and nowadays, where pictures are framed instead of made into hanging scrolls, by making sure that the frame is as inconspicuous as possible.

To the Western eye, the framed picture often looks unbalanced, since it is customary to have a large amount of space above the painting, representing heaven and a smaller space below the subject matter, which represents earth. Non-oriental eyes also have to get used to the idea that white space is used to convey both water and sky, as well as the fields which would normally be the background for flower and bird paintings.

Probably the best-known subjects in Chinese painting are bamboo, landscapes, calligraphy and horses. Most of these paintings are composed entirely in shades of black, which the Chinese regard as the most important of all the colours. It is quite surprising how many colours and tones can be conveyed by the ‘Seven Shades of Black’.

To see how effective this can be, a simple composition to try would be chrysanthemums, with the flowers painted in the outline technique. For this method of painting, the brush is used as a drawing instrument, although of course, it is still not possible to change any line once it is put on the paper. Because the brush acts rather like a calligraphy pen, it does produce lines of variable thickness, so it is important to paint the flower petals in a structured way so as to make maximum use of the brush tip.

Ink should be made first by rubbing the black ink stick in water on the ink stone.

How to paint Chinese-style flowers

Each petal is made up of two strokes:

Holding the brush vertically and painting from the centre of the flower outwards, each petal is made up of two strokes (see above). The first stroke, rather like an umbrella handle, includes the petal’s rounded end. The second stroke goes up to meet it. The brush should be loaded on the tip only with black taken directly from the ink stone.

The flower is built up by painting numerous petals from the centre outwards.

Flower turned to the side. Flower looking upwards. Half a flower behind

How to paint Chinese-style leaves

The leaves have three lobes and are painted using the solid stroke method.

First make some grey ink by taking some black paint from the ink stone and mixing it with water on a plate or palette. This time the whole brush should be loaded by rolling it in the paint, scraping off the surplus and repeating these two actions until all the bristles are saturated, but the brush point is maintained. It should now be quite wet.

Paint the central leaf lobe first in the direction shown, which is always from its growing point, and for this composition will be from the top downwards.

Tilt the brush so that the point touches the surface of the rice paper first, then press and pull and finally let the brush leave the surface. The two lobes are then added, one on each side.

As with the flowers, the leaves should be grouped closely together.

How to paint Chinese-style stems

For the stems a pushing stroke should be made from the stem base up towards the flowers. Leaves can then be joined and MI DOTS added to break up the monotony.

There is a prescribed order for painting most flower compositions, which is flowers first, then the leaves and finally the stems.

For the stems, the bristles should be loaded halfway along their length with a shade of grey which differs from that used for the flower heads and the leaves. Using a pushing stroke, move the brush up from the stem base towards the flowers, ensuring that the stems also are close together at the base, but not in a horizontal line, or parallel to each other. 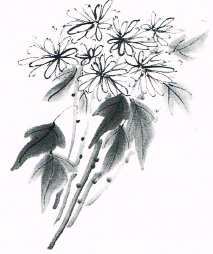 This simple composition is ideal for a small greetings card

Leaves can then be joined on to the stems and finally small dots, called MI DOTS, are added to the stems, breaking the monotony of a straight brush stroke, to indicate where leaves have dropped off or where the stem has a small nodule.

Traditional Chinese paintings convey an atmosphere of peace and tranquillity. Even birds and animals are depicted poised, as though in quiet mood.  Small chicks make an ideal foil to the chrysanthemum composition.

Tradition demands that birds also are painted in a set order; eyes, heads and beak first so that the bird can then eat, then the rest of the body. The chicks can be painted in either yellow or black and are composed of solid strokes with additional black lines and dots.

The yellow chick has been painted using two strokes for the head and the body, with a brush loaded with yellow and orange on the tip. The legs and wings are orange, but the eyes, beak and feet are painted black as on the grey chick. 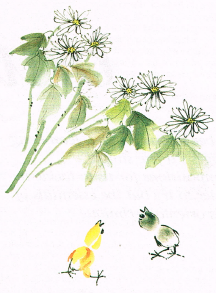 For the complete composition, with flowers and chicks together, make some small changes in the flowers, giving them a yellow centre space to make the flower look whiter.

Add green and brown to grey for the leaves, so that the picture is more colourful, although, if you wish, it could still be painted all in shades of black.

Other small birds, such as sparrows, can be painted in a similar way and used to enhance the hydrangea and chrysanthemum compositions. Perched on a branch, they give instant life to flower and blossom compositions. 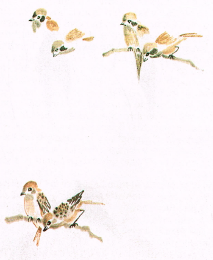 How to paint a Chinese Dragon

The most famous of all creatures in Chinese mythology is the dragon. It comes in many forms and features as a design motif on a variety of artifacts from early bone carvings, coins, temples, swords, screens, embroideries and paintings to modern ceramics.

To the Chinese it is a divine genius of strength and goodness. There are three different important species, living in the sky, the oceans and the mountains, of which the most powerful is the species which is said to inhabit the sky.

The dragon can be painted in any colour, although red dragons are very popular, since red is the Chinese celebratory colour.  The composition uses both solid strokes and outlines.

Since this is a symbolic creature, it is important to maintain the accepted traditions. Only the imperial dragons, featured so often on royal robes and ceramics, are allowed to have five toes.  All other dragons have four. 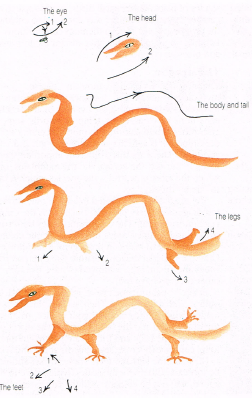 It is advisable to achieve this stronger tone by adding a small amount of black to the basic colour. 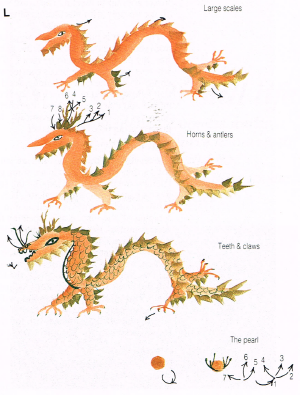 It is most fitting to conclude with this painting of the dragon, because, not only is it one of the symbols of the Chinese Zodiac, also representing ‘the East’ and ‘Spring’, but it is the emblem of vigilance and safety.

The word for dragon, ‘lung’ or ‘long’, is contained in the Chinese characters of the author’s red seal on the completed dragon painting. 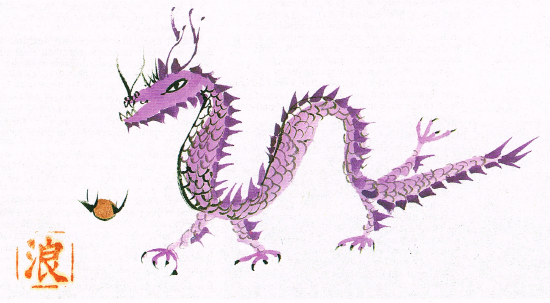 Learn more about the art of Chinese Brush painting with Pauline Cherrett.

Paint the Four Gentlemen of Chinese art with Maggie Cross. 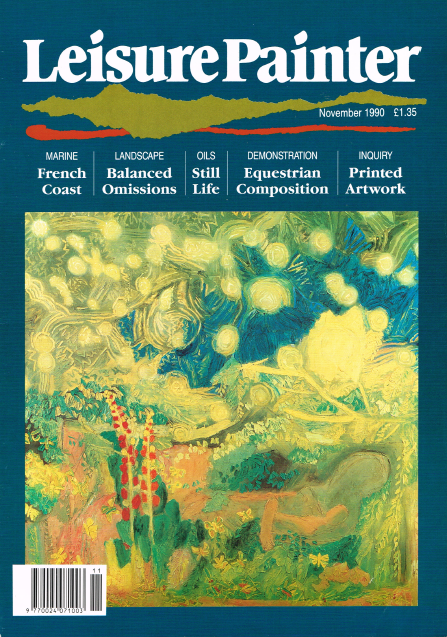 How to paint a Mediterranean coastal scene How to paint a still life with teacup How to paint a tiger using Chinese brush painting techniques Sports art - how to paint sports figures in water-mixable oils Paint a Patchings vista in gouache with Graham Laughton