How to succeed in painting the human figure

How to succeed in painting the human figure 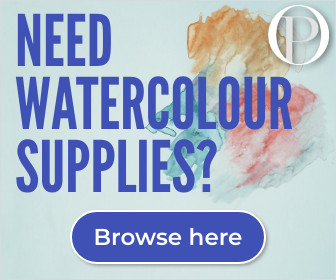 'Continuous practice in life drawing builds the ability in you to draw well and confidently,' says Sue Sareen. 'Follow the exercise and demonstration below for ways to improve your figure painting'.

Once there is some understanding of form and the nature of figures, they can be translated from photographs successfully.

To avoid homing in on detail at the expense of seeing the overall shape, scale and pattern of the image, try turning your photograph upside down and copying it in this orientation.

No longer does the brain need to identify it as a figure. Instead it can now be appreciated simply as a series of coloured shapes and patterns on a piece of paper. This makes it much easier to copy without being distracted by details or including preconceptions of how a figure should look.

When the drawing and photo are turned the right way up the figure can then be corrected, if necessary, as at this point mistakes are easy to spot.

When the photograph is turned upside down, it’s easy to see that the figure is made up of several triangular coloured shapes and spaces. After all, this is just what the image is: a pattern on a piece of paper. Turned the right way up again, we identify it as the figure of a girl skating. 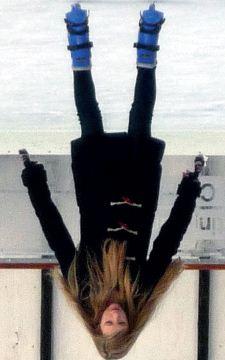 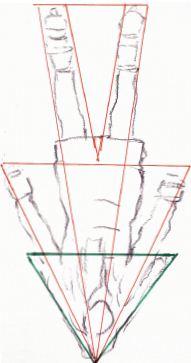 The subsequent drawing of the ice skater was made upside down 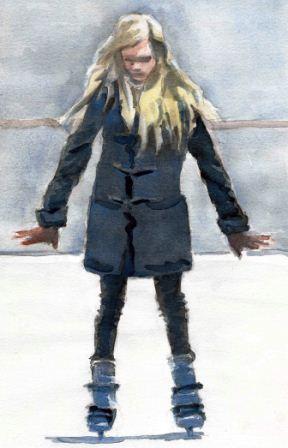 Some imaginary extra details were added, such as the girl’s hands.

Demonstration: Figures on the Beach 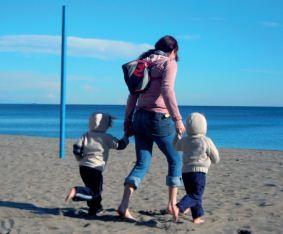 Here I selected a photograph, dear to my heart, of my daughter and her children.

I use my own photos, as there is always some reason why they were taken: something captured my imagination, a reaction to the image, specific to me and which will be absent from pictures taken by others. And besides, if you use other people’s photos you might be infringing copyright.

In this scene I simplified the background to remove potential conflicts with the figures and extraneous detail, such as the post.

I also removed my daughter’s backpack. The bag was an unnecessary detail, detracted from the symmetry, and the attractive, dynamic, triangular composition of the figures. 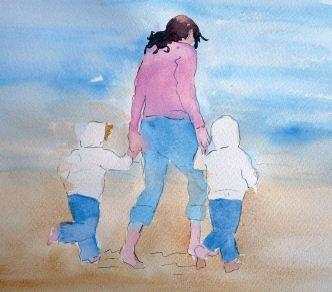 1. A good way to start painting with watercolour is to think in terms of layers. In this approach you paint from the lightest tones and colours through to the darkest tones. Here I painted the palest colours first, laying on the paint in light watery washes, and not worrying too much if the colours ran into each other. Anything coloured white, such as the boys’ jackets, was left unpainted.

2. A useful trick to soften overly hard edges, which can occur at any stage, is to either blot while the paint is still wet, or gently nudge an edge with damp tissue or a moist brush.

3. I left painting the colour wash for the sea until the sand was absolutely dry. I then floated some of the blue of the water over the yellow sand, echoing what happens in reality as the tide comes in. Because of the transparency of watercolour, the yellow sand showed through the blue water, creating a greenish cast, as happens in the real world.

1. When the initial layer was dry, the second layer was applied. Here I was looking at the darker tones. Since these resulted from the interplay of light with the form of the figures, these tones had the striking effect of making the image look three dimensional. A third layer may be necessary to complete the picture.

2. I added a few more details and strengthened some of the darkest tones. This increased the drama of the scene and further strengthened the sense of form. The background was left simple so as not to conflict with or detract from the figures.

3. Finally, using a light touch with the point of the brush, a suggestion of the moving water was made. 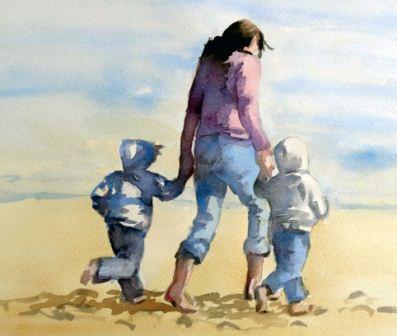 How to paint a March hare in watercolour with Rachel McNaughton simple drawing, solid, without excess of pretensions, the drawing is enough to communicate the general idea of the work, it is not seen that it has aspirations of being naturalistic, it is sculptural, firm, the color is vibrant but it is managed with balance and with enough intelligence to make it not explode within each part of the work competing individually. to recommend my favorite artists Pierre-Auguste Renoir, Frida Kahlo, Roberto Matta Gabino amaya cacho and Pablo Picasso.

It is good to see a breakdown of how to paint figures in watercolour. Sue S