My art story - I nearly never was a painter 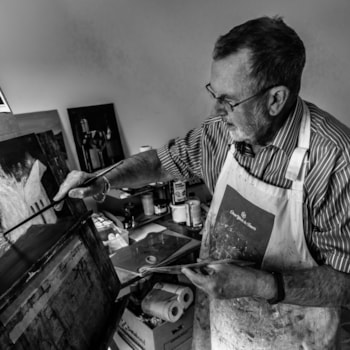 The first term at Boarding School, I was just over 12 years old, in the Art Class the teacher Roy C said paint an explosion. I buried myself in the event - white in the centre, spreading outwards in a jagged succession of concentric bursts of yellow, orange, red, purple, black, all fire and force. The teacher looked over my shoulder. “What is that!” “An explosion Sir.” He lifted my paper off the desk and tore it in half from top to bottom, then he put the two halves together and turned it and torn it again, dropping the fragments into a wastepaper basket. I didn't understand what I had done wrong. I looked and what the other boys were doing and they were painting green hills with little grey v shaped spurts coming out of the top. I switched to the metal work class and learnt how to beat out copper into a bowl. Some ten years later I was working in a hotel in Maidenhead, working mornings and evenings with afternoons off, and by chance I came across an afternoon pottery class for adults. I joined and loved it - had an immediate affinity with shaping clay, and over the years kept it going to the point where I seriously considered a career as a potter. Fifteen years later I was married and now attending an Adult Education Pottery Evening Class, where we could make anything we wanted. By now there was only so many plates, bowls, vases and mugs a home can accommodate and I had made many. The idea of making mechanical movements in the wrong material appealed to me, so I made in clay a mechanical toy with moving parts, an Armadillo standing on a box. Winding a handle on the side of the box turned a plate on the top with a small fly modeled on it. As the fly passed the nose of the Armadillo its tongue popped out to try and eat the fly. I couldn't take pottery any further and the next term enrolled in the Watercolour Evening Class. I painted watercolours in a succession of Adult Education Evening classes for the next 30 years, until I retired, at which point I thought I will try oils. What a revelation! It was like going back to pottery! One could build a painting; the textures, shapes and layers, and since then I have done nothing except plunge deeper and deeper into a love of oil painting and its possibilities, attending courses and building to the point where now I ask myself three questions. What do I want to paint? Why do I want to paint it? How do I want to paint it?

Really enjoyed reading your story. Keep it up! Next project - an explosion in oils?

A pictorial alphabet of favourite places around England – O for Orwell

A pictorial alphabet of favourite places around England – N for Nothing in particular !