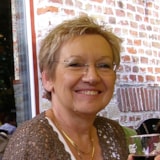 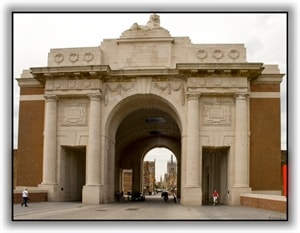 I just saw on our Flemish TV the live reportage of the Special Remembrance Last Post Ceremony at the Menin Gate in Ieper (Ypres). It was very emotional to see hundreds of people there to honour all those 54,896 mostly young men with no known grave, whose names are engraved on the walls of this huge monument. The firemen playing the Last Post (they do it every evening at 8pm voluntarely, just one of them) now they were there all 8 and the oldest one is over 80 years old, doing it for almost 50 years. There was one Scottish piper playing all alone (very moving!) . All the ambassadors of the different countries and many delegates of all sorts of associations laid flowers and poppy-crowns. Because the Olympic Games are in London next year there was a whole group of former Olympic Champions and officials. It was an enormous mount of flowers!!! The Gate was built in 1927 in Ieper on the way to Passendale (another big battle field of the Great War) and the names on it are from soldiers and officers dying before the 16th of August 1917. The other names are on the Cemetary of Tyne Cott (because the Menin Gate was not large enough to put all the names on!!!!). I could see hundreds of people standing around the Gate, hundreds in the street to the Gate and the reporter said that there was a large screen on the Market Square with hundreds of viewers there. It was a very emotional ceremony and I am glad I checked the programmes for today just before it started, so I could watch it!