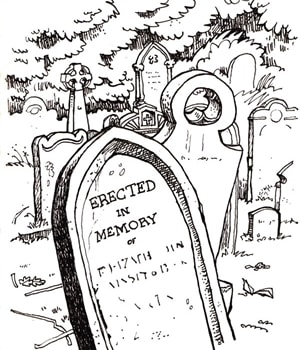 Occasionally, the North of England Art Club organises a day out for members to do some drawing, painting, whatever. This used to happen a lot a few years ago but the main instigators have fallen by the wayside. Pity, because they used to be good fun. Still, here was one on Monday and off I went in a friend's car. I've seen the road sign to "St John Lee" hundreds of times: it's on the roundabout on the main road just north of Hexham, but I knew nothing more than that. It turned out to be a really nice little church tucked away in the depths of the country with a long hut nearby that they hire out for groups such as ours. By the time I got there, Ian was setting up his table outside to begin cooking sausages, so I wandered around the church and graveyard taking a few photographs until the sausage sandwiches were ready. Two sausage sandwiches later, I was off into the graveyard to draw these headstones. The one in the foreground was an interesting lesson in the general impossibility of immortality. After the quite easily read inscription of ERECTED IN MEMORY OF, the stone had almost completely eroded away and the details of the person were pretty much indecipherable. Just as I finished the drawing, the call came for cups of tea, lemon drizzle and Victoria sponge cakes. Sometimes food can be a great distraction to the struggling artist, so no more drawing was done. http://boogiestreet.blogspot.co.uk/2016/07/st-john-lee.html