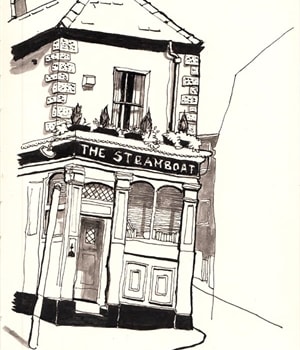 We'd been putting off our visit to the Customs House in South Shields until we could count on better weather. How much experience of British weather does that display? To be fair, although the day started a bit grey and damp, the sun was starting to break through as we made our separate ways to the banks of the Tyne yesterday. But the wind! Oh the wind! Blasting in from the North Sea and off the river, the wind made finding shelter a real necessity if you didn't want to freeze. Mike had made a good start when I got there, by drawing a complicated Victorian building that Richard identified as the old River Police Station. It was, as he obviously enjoyed telling us, the place where corpses were once laid out after being fished out of the Tyne. Fascinating though this might be, the building was nevertheless a busy concoction of brick and sandstone Neo-Classicism, so I headed of for something more basic. My first choice was the brick pillar standing opposite the Customs House. I still can't decide if it was built as a chimney or as a brick tower or pillar, perhaps supporting a navigation light. Built of rendered brick it just stands there, uncelebrated, except by pigeons courting on the top. In the shelter of a brick wall, I was able to stand in comfort and draw the entrance to The Steamboat, "CAMRA Real Ale Pub of 2015". Interrupted only by a young woman who walked past me up and down the hill four or five times glued to her mobile phone, telling the world and her friend about how awful her boyfriend was and what he'd done on Facebook, I got the drawing done in about an hour. And my only regret is that due to seriously mismanaging the dimensions of the front wall, I had to reduce the number of windows from three to two. But as my Mum would have said, a man on a galloping horse would never notice. 3.30 and coffee in the Customs House cafe called. By the time I got there, some were already sitting and Anita was being indecisive. Cake or scone? Or maybe a panini? Or what was that other thing on the menu? Eventually we all sat down and after eating and drinking, we passed our work around. As usual it was all fascinating and Kim kindly allowed me to include this photo of everyone holding up sketchbooks. Well, everyone except me, which probably accounts for my glum look. If you look carefully, you can see I'm eyeing up the lonely book at the front of the table (Jenny has mine). http://boogiestreet.blogspot.co.uk/2016/06/sketch-crawl-10-customs-house-south.html