Should I bin my old artworK? 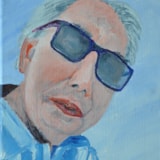 Should I bin my old artworK?

How do you store your old artwork?

When I say should I bin my old artwork, I don't mean the paintings that I son't like, or didn't quite turn out as I had hopedI mean the whole lot of them. Well I suppose that probably does equate to those that didn't turn out as I hoped. I woke up this morning with this thought in my head, and by one of those strange twists of fate, part of the answer was staring me in the face when I logged on to the POL site. But getting back to the problem, I do not have a prolific output. If I counted up the canvases, canvas boards and sheets of textured paper there would be barely 50 of them, but if you are going to change the time to do it is sooner rather than later. By change I mean keep only a digital archive - in fact all of the 50 are digitised. Everything else in my life is getting digitised. In my work I send out digitised reports, digitised invoices, my bank account is on-line, so why not just store digital images. After all that's how I submit my work to the POL site and some of the "paintings" there are entirely digital. I have no problem with that, though I so wish there was a "digital" category alongside acrylic, oil, watercolour etc.. That brings me to the first reason for not binning the "collection". The images are not quite the same. I photograph them at different apertures, select the most realistic colour and then take a series of pictures with different "white balances". Even then I often have to enhance them to match the original. though I do try and stick to contrast and brightness only. The one time I did have to tweak the colour, I did feel like I was cheating. Rather like one of my early paintings, one I thought had worked rather well. My mother saw it on my wall and said I had promised it to her a few years earlier. I honestly could not remember if I had or not, and I didn't really want to part with it so I cheated. This was back in the late 90's, and I had just taken delivery of a magical new device - a scanner, which I needed as I worked from home half the week. So I scanned the image at high resolution (the output seemed far superior to modern scanners), and printed it out, best quality, on some good water-colour paper. The original had been acrylic, the copy looked good, so I framed it and gave it to my Mum. It was, I felt, cheating, though she never realised it was a copy. It was at least the same size. Which brings me to the second point, size! POL site submissions are digital, many competition submissions are digital, and although shape is captured there is no information on size. Size matters, or at least makes a difference. This can be seen readily in the Sky Arts "xxx Artist of the Year" series. We see the the digital image and then at the beginning of the episode we gat a sense of size as the judges see the "original" submissions for the first time, and that can be a surprise. This brings me to the third point, which I couldn't quite put my finger on, but was neatly expressed in a comment on the POL site this morning, with reference to a painting of daffodils. It said "..the camera never quite captures the vibrancy in a painting...". It is texture, it is the way the paint reflects the light, it is a series of intangibles that all add up to "vibrancy". So although I shall keep on digitising my paintings, I shall also hang on to the originals. After all, I asked myself, would I travel up to London to see the National Gallery, or even a visiting exhibition, if all that was available was an electronic screen to view the paintings<

Little devil, deceiving your mum.... Thing is about digitizing everything - files can be corrupted, or just lost. I do chuck out some of my stuff which, looked at later, makes me wonder what on earth I was thinking of, but on the whole if I can't sell it, I do tend to keep it - I have somewhere in the region of 100 paintings, I think: possibly fewer. Some I've kept because I quite like them, some because I think they have a lesson there somewhere, some because I can't believe the sheer tastelessness of the general public and am convinced they'll leave me one day! Seriously though - keep 'em. Unless revealing them would cause you to blush and shuffle your feet in embarrassment, hang on to them. As for storage - many of mine are up on the wall; I AM running short of space, but if I ever decide to have another exhibition, I won't be short of work to get framed up.

Oops did not realise that my blog had been foreshortened - perhaps I transgressed some limit on size (better check that out) or was just clumsy with the fingers and posted prematurely . But I went on to say no, I wouldn't go to see a &quot;digital&quot; exhibition. Vibrancy and size does make a difference. Nothing electronic prepares you for the size (2 m x 3 m) or the vibrancy of, for example Seurat's &quot;Sunday afternoon at the Grande Jatte&quot;. So I did decide to keep my originals, though can't help but wonder how the more prolific members of the POL manage their storage space. Size does matter and I too would encourage all postings to have the size, as well as the medium.

Another thought, maybe POL could make size and medium part of the posting process.

Tony definitely don't get rid of your 'proper' paintings. Although they are all digitised as you say, it is good to look at the originals from time to time and see how much improvement you have made over time. As for size, I keep saying this on the forum that it would be so good if people would state the medium and the size. It's so much easier to imagine the painting and how it would look 'in real life'. I always have included the size and it's so annoying having to ask the poster what he/she used.