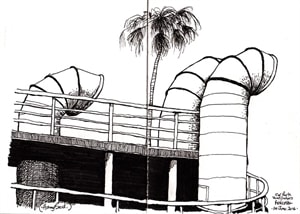 In June, Pat and I went to Madeira for a week's holiday. We stayed at the same hotel as last time, Vila Vicencia, because we'd liked it so much and we weren't disappointed this time either. It's a nice little group of buildings clustered round a small pool and far enough out of the centre of Funchal to be quite quiet, but near enough to walk in or take the bus. I was determined to get more sketching done this time and got off to a good start with the double page spread of the car park ventilators. While I was drawing it, I could hear my Mum in my head saying, "Couldn't you find anything nice to draw?" but I'm resigned to drawing only what interests me and these shapes I found fascinating. My recent trips out with my Sketch Crawl friends have certainly made me more confident in simply starting a drawing and making it work, but because of this need for "interesting" subject matter, I'm still slow to settle on a subject. Which meant that I only managed to do two more, despite constantly keeping my eyes open for things that would appeal. There was one new development in this drawing trip: I moved my position several times when making the first two drawings. Not an earth-shattering development, because artists have been doing it for hundreds of years, but new to me. With the ventilators, I moved my position to get the (quite important) palm tree where I wanted it; with the lighthouse drawing, I moved from drawing the rock outcrop to a position where I could take in the cactus and once again so that I could have a better view of the lighthouse. No such moving when I did the drawing of the folly at Monte Palace Tropical Garden, because I was limited to a park bench on another terrace overlooking the folly. A very complicated subject, I found myself getting very confused and perhaps it shows a little in the drawing; however, I think the coloured pencil additions made back at the hotel help to pull it together. http://boogiestreet.blogspot.co.uk/2016/07/madeira-2016.html