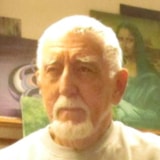 This year I attempted to complete a WW1 painting in honour of my maternal grandfather Walter who enlisted 1914 and was demobbed 1919, a one time Lewis machine gunner he was wounded once though thankfully not seriously. Walter lived until his eighty sixth year the war affecting him greatly all his long life, rarely would he talk about it and even then we would only get some fragment before he would frustratingly retreat from the memory. One such fragment that I wished to paint related to his small detachment marooned in a shell hole in no man’s land waiting for night to come so they could sneak back to their lines, night came, so did a German patrol which of course led to a fire fight, hearing gunfire someone at the front sent up star shells, then to compound their woe the British opened up an artillery barrage against the German artillery. I never did find out how the story ended! I failed miserably in the painting, discarding several studies before I finally gave up at the last study on which I had tried so hard. The problem is not in the pictorial elements or the composition but in my realisation that simple pictorial description alone can never portray the emotional extremities of life and death battle but will always look like something out of boys own, the opening scenes of Saving Private Ryan probably come terrifyingly very close to reality. Personally I give up.

How to Paint the Mona Lisa with Adebanji Alade on Channel 4 this week!