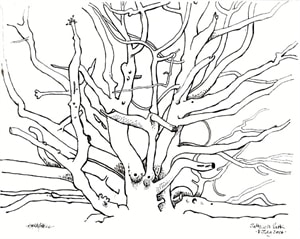 http://boogiestreet.blogspot.co.uk/2016/07/drawing-in-saltwell-park.html As a break from the normal session in the workroom of the Shipley Art Gallery, Gateshead Art Society decided on an afternoon sketching in Saltwell Park. Amazingly, after a morning shower, the weather decided to co-operate and half a dozen of us turned up in bright sunshine to make minor masterpieces in our individual ways. For good or ill, I opted for the very complicated "Climbing Tree". It's a very old yew tree whose branches have played host to generations of kids, and I speak from personal experience. Part way through the drawing I realised the sun had moved round and was now shining directly into my one good eye. I should have brought a hat to shade my eyes, but in the absence of one, I went for a walk to see how others were doing. Coming back to the tree about ten minutes later, the sun wasn't being any more helpful, so I moved position to work on the right hand side branches, ignoring the small boy now clambering over them. Eventually, however, I realised I'd done enough for the day and coffee called at the cafe in Saltwell Towers.