Olabamiji Yemi Tubi, commonly known as O Yemi Tubi and also known in the art world as MOYAT was born in 1955 in the city of Ibadan, Nigeria, West Africa. His BFA Degree was obtained from Valdosta State College, Valdosta Georgia USA where he majored in Graphic Design. He was awarded Art Scholarship and a plaque (Excellence in Fine Art) 1984 by South Georgia, Douglas Georgia, USA. He had a solo exhibition at Millfield House, Edmonton, London England in 1992. He currently lives and worked as a Graphic Artist in United Kingdom. While working as a Graphic Artist, he spent many of his free time drawing and painting.He works with various mediums: pencil, water colour, acrylic and oil paints. His works, influenced by Renaissance artists and current world political situation, evoked him to do some of his recent paintings like The Arab Revolution and The Eagle has landed. (The Eagle has landed was shortlisted for the ArtGemini Prize 2013 and exhibited January 2014). His painting “Arab Revolution” was exhibited in a group exhibition with The United Society of Artists at Cork Street, London, UK. Five of his paintings were exhibited in a group exhibition of The Best of Salon Des Refuses 2014 July in London UK. His paintings (Portrait of an Artist) won 2014 Master of Art International Gold award in September and also 4th place in Best Expressionism-Figurative Art of 2014 American Art Awards; and (The Eagle has landed) won award in Best Political Commentary Art of 2014 American Art Award. Both paintings were exclusively published on Highlight Hollywood online news on 18th September and 5th October 2014. O Yemi took part in WAC 2014 group exhibition in October 2014. His painting, “Hunger in the Land of Plenty, exhibited in Ashurst Emerging Artist Prize 2015; chosen by the United Nations for their multimedia installations at the Milan Expo 2015 and was selected for the final round of Art Olympia Competition 2015 exhibition with price award in Tokyo, Japan. O. Yemi painting- “The Bleeding Roses” received a Special Recognition Award in2015, 17th Annual Judeo-Christian Juried Online International Art Exhibition; His painting – “Peace in our time- Eagle” won “Award of Excellence” with cash award in 18th Annual Judeo-Christian Juried Online International Art Exhibition hosted by Upstream People Gallery of Omaha Nebraska, USA and also exhibited with the 2016. 2015 American Art Awards awarded 2nd Place in Political Commentary to O. Yemi’s works: “Hunter in the Land of Plenty” and 5th Place in Religious & Spiritual category “The Bleeding Roses” His Painting – Portrait of an Artist was selected for exhibition with Federation of Canadian Artists in their annual Painting on the Edge 2015. January 2016, He was awarded First International Prize- Leonardo Da Vinci – The Universal Artist Award 2016 in Florence Italy. 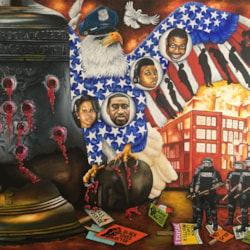 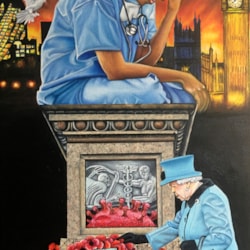 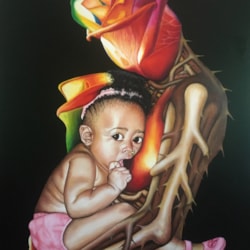