David Wiseman was born in Essex in 1949. He studied painting at St. Martins School of Art at the Royal College of Art leaving in 1975. At the Royal College he was awarded the John Minton Memorial Prize. He has been a painter for over 40 years and since 1987 has also completed a number of large scale public artworks. He has taught painting in many art schools across the country at degree and MA level. In 1977 he gained an Art Council award followed by a Greater London Arts Association award in 1978. Also in 1978 after having worked in a run-down dockland building near Tower Bridge with a group of fellow ex-students from the Royal College he moved to a studio in Holborn with Graham Crowley, Vanessa Jackson and Tim Jones. In 1980 he was in a shortlist of three for the National Gallery Artist in Residence. In 1985 he moved to Perivale, near Ealing building a large wooden garden studio alongside studios occupied by his potter wife Betty. He has exhibited widely both as an individual and in many important selected group exhibitions. These include the New Contemporaries, John Moores, Hayward Annual, RA Summer exhibition, Discerning Eye and a number of London Group Open exhibitions. Many individual shows include those at the Serpentine Gallery, Peterborough City Museum and Art Gallery, Minories, Colchester, Rowley Gallery, London, Water Street Gallery. Todmorden, Lancashire. etc. He has taken part in important touring exhibitions to Germany, Spain and the U.S.A. including a British Council exhibition to Aachen and tour which also included Hodgkin, Auerbach, Kossoff and Kiff. He has been included in many important curated exhibitions in this country including those at Modern Art, Oxford, Kettles Yard, Cambridge and the Camden Arts Centre. He now shows frequently at the Rowley Gallery in London and the Water Street Gallery in Todmorden, Lancashire. He has work in many corporate and public collections including the Arts Council, Prudential PLC, London Borough of Hammersmith, Open University, Peterborough City Museum, Museum Municipale, Ourense, Spain, Lewisham Hospital, Frimley Park NHS Trust, and many more. In 1999 four paintings were purchased by the Bank of England. He now features on the BBC Your Paintings website. His work is represented in private collections in Britain, USA, Australia and in many parts of the world. In 1989 he completed a major ceiling mural at Charing Cross Hospital which was followed during the next 15 years by a series of important large scale public art projects. These include those at Frimley, Royal London, West Middlesex and Ealing Hospitals. In 2001 he designed a temporary mural that was installed in front of damaged buildings in Ealing Broadway after the IRA bombing. In 2010 he was elected to the National Acrylic Painters Association winning their Presidents Prize and Adrian Henri Memorial Prize in exhibitions at St. Ives and Birkenhead. In 2013 in their Centenary year he was elected to The London Group. 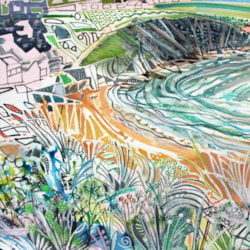 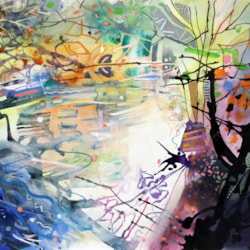 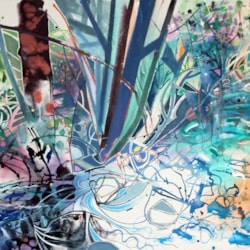 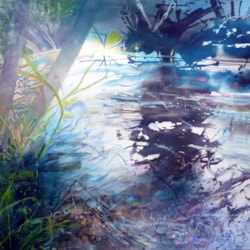 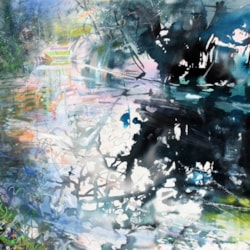