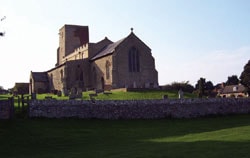 The reference photograph of Morston church on the north Norfolk coast (right), that I have used for my first demonstration, was taken on a bright September day, and the church was lit on the left-hand side by the late afternoon sun. At first glance the building looks quite complicated, with a number of wall elevations and roof surfaces. However, I have a simple rule when approaching any subject in watercolour: view the subject through half-closed eyes as if judging tonal values, and watch the unimportant lines within the subject disappear.

Furthermore, areas of similar tone join together to give the shapes that will provide a convincing image when rendered in watercolour.

Spend time at this stage observing the subject before rushing into the work. Make a few tonal sketches to help you analyse the main shapes and decide what to put in and what to leave out. In this picture the image of the church and its surroundings can be broken down to just two shapes: the overall outline and those areas that are not receiving direct sunlight, or are in cast shadow. In Figures 1 (left), and Figure 2 (below), these two shapes are shown as separate watercolour washes.

In Figure 3 (left), the washes have been combined to give an image of the church. I did some preliminary drawing before applying paint, but this was done with the intention of providing boundaries to guide the brush, not rigid shapes to colour in.

The colour and tone of each shape were varied in order to create interest, and I left flecks of unpainted paper to help describe the texture of the building materials. Failure to do this would have resulted in a static, cardboard-cutout effect. 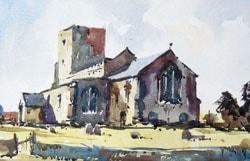 In the finished painting, right, Morston Church, Norfolk, watercolour, 15X22in (38X56cm), I have added the windows, a foreground and a simple sky. Various brushmarks of differing colour and tone in the additional detail and darrkening to the buttresses create interest and help the picture read better.

For this painting my colours were Winsor & Newton's Cotman ultramarine, raw sienna, cadmium yellow, burnt sienna, burnt umber and Indian red. The paper was a half imperial sheet of 200lb Bockingford and the only brush used was a Rosemary & Co size 4 mop. 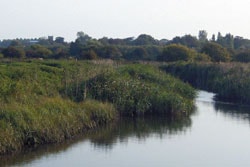 At first sight my next demonstration appears deceptively simple, consisting of just two shapes. The photograph, right, shows the river Glaven at Cley, also in north Norfolk, with an arrangement of trees and fields in the background and a glimpse of Wiveton church.

Closer examination will reveal that within the two shapes there lies considerable variation of tone and colour, and there are many secondary shapes such as trees, bushes and reed beds. The secret of portraying these is not to be sidetracked by their individuality but to sta 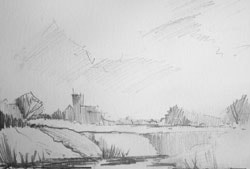 te them for what they are: parts of a greater whole.

As I did not particularly like the composition, I reworked it as a simple pencil sketch placing more emphasis on the silhouette of the church and repositioning the river in the landscape so that it is closer to the church. I also lowered the skyline as I thought the foreground was too dominant. 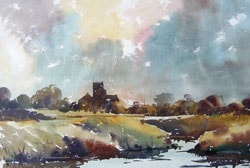 After applying an overall wash to describe the sky and its reflection in the water, I overlaid two large wet-into-wet and wet-against-wet shapes, one representing the church and background trees, the other the river banks and their reflections; see the finished painting, River Glaven, watercolour, 15x22in. (38x56cm), right. Any light on the church was described by leaving holes in the first shape. By far the greatest challenge of this painting was to leave just enough flecks of unpainted paper and subtle wet-into-wet passages to hint at the trees and vegetation and to invite the viewer's imagination to do the rest.

I could not resist a rather flamboyant sky. As a general principle, this is acceptable if the foreground is relatively quiet, as is the case with this picture.

I hope you will agree that the final painting is more seductive to the eye than a cluttered rendition showing every tree and blade of grass. I cannot over-stress the importance of suggestion within the main shapes. Variation of tone and colour plus the addition of carefully reserved white edges are essential if this approach to watercolour painting is to be successful. 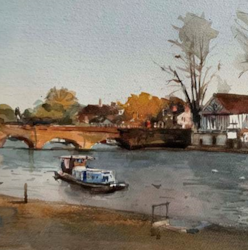 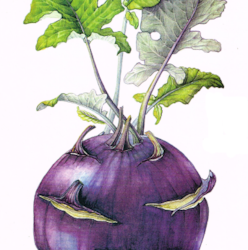 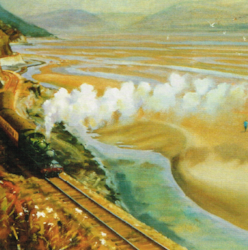 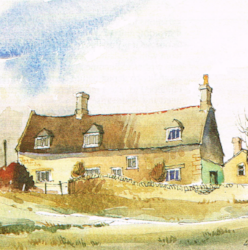 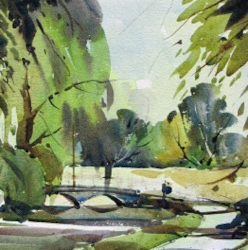 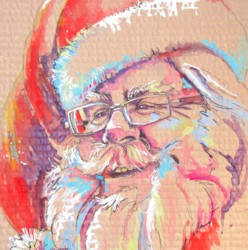 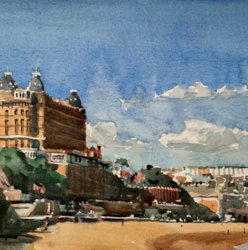 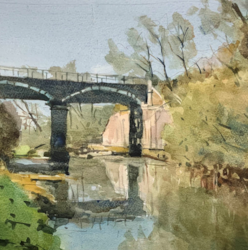 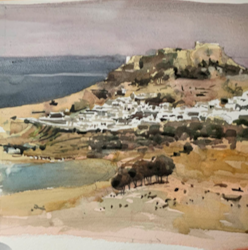 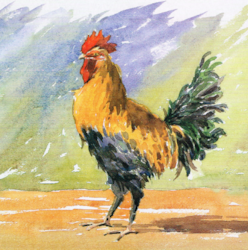