Working with an airbrush

For the hobby painter, there are many advantages to using an airbrush for painting. It can be a great time saver when you are laying in background washes and, when mastered, you can work at a phenomenal speed if you so desire. As the airbrush leaves no visible brushstrokes, it can also be used to produce photo-realistic paintings.

Painting with the airbrush is always consistent; paint is laid down smoothly and it will not affect the underpainting, even when wet. As a result, it is a great tool for glazing when using transparent colours layered over one another, which in turn allows for a greater mixing of colours on canvas and other surfaces.

Pre-cut stencils are also used to create intricate details when working on portraiture and landscapes.

The cost of the equipment can be expensive, as a good quality Iwata airbrush and an Iwata silent compressor can run into several hundred pounds, but if the equipment is well looked after it will last a lifetime. For these exercises, I used an Iwata Eclipse CS double-action airbrush (£150rrp; see below for details).

The airbrush has been around for over 100 years, invented by Charles Burdick and presented to the world Colombian exposition in Chicago in 1893. Burdick used his airbrush to produce watercolours and was the first artist to have an airbrushed painting accepted by the Royal Academy of Arts in London. He also founded the Fountain Brush Company in the USA and it was the first company to sell airbrushes on the open market. His device is similar to today’s airbrushes with his initial design remaining pretty much unchanged over the years.

During the 1970s, several artists, including Chuck Close, Don Eddy and Audrey Flack, took up the airbrush and together they started the Photorealist movement in America. The airbrush is now firmly entrenched in the art of today and is beginning to be accepted as an art form in its own right.

How to use the airbrush 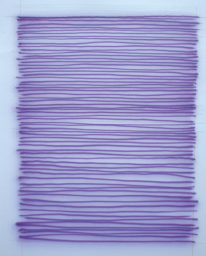 1. Tape a sheet of A4 paper onto a support board on your easel.

2. Using a pencil and ruler draw light horizontal lines across the paper.

3. Place a few drops of colour into the airbrush cup. The airbrush is now ready to spray the lines.

4. Set your compressor between 20 to 25 psi, press down on the trigger for air and gently pull back on the airbrush trigger to start the flow of paint.

5. Start to move the airbrush across the paper at a distance of approximately 5mm to 10mm from the surface.

6. At the end of the stroke, push the trigger forward to cut off the paint flow. Once you have done this a few times you will notice how the closer the airbrush is to the surface of the paper, the finer the line you will produce. Repeat this exercise until you have filled the paper with lines. 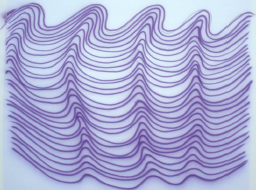 1. Tape a sheet of A4 paper to a support board then draw a curved line on it.

2. Load the airbrush cup with a few drops of colour and position the airbrush approximately 5mm to 10mm from the surface. Press down on the trigger, pull it back for paint and follow the curved guideline.

3. Continue spraying the curved lines, leaving a small space between each one and try to maintain the shape until the sheet of paper is complete.

This is a masking exercise using low-tack masking film. The shapes for these exercises are pre-cut on masking film with a backing sheet using a Craft Robo cutting plotter. Alternatively you can easily cut your own stencils from masking film using a sharp craft knife. 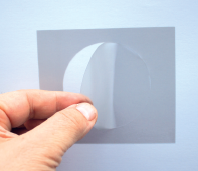 1. Gently place the stencil on your paper while being careful not to crease it then remove the inner circle. 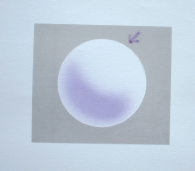 2. If you imagine the light is coming from the right then the right side will be the lightest and the other side of the sphere will be in shadow.

3. Place a few drops of colour into the airbrush cup and, from a distance of about 30mm, spray the dark side of the sphere while following the curve of the circle.

4. Repeat spraying until the desired depth of colour is achieved then spray a very light coat over the opposite area to help define the sphere. 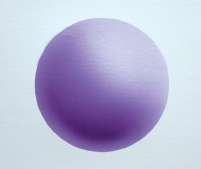 5. Remove the masking film. You will notice there is some over spray around the edges of the finished circle. 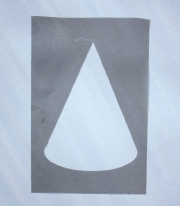 1. Place the stencil on your paper and remove the cone. 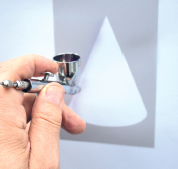 2. Place a few drops of colour in the airbrush and, from a distance of approximately 50mm, spray down each side of the cone, leaving the centre light to give it a three-dimensional effect.

3. Remove the stencil from paper. 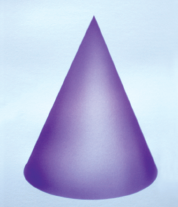 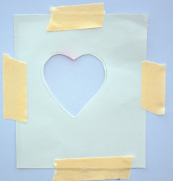 1. On a thin piece of card, cut out a heart shape and use masking tape to secure it to a sheet of paper. 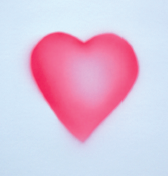 2. Place a few drops of red into the airbrush cup, and spray round the shape lightly from a distance of about 10mm then, from a distance of approximately 50mm, fill in the area leaving the centre lighter to give it a three-dimensional effect. Because this is a loose mask, the resulting edges will be much softer than if we had used a fixed mask.

Iwata Eclipse CS double-action airbrush (£150rrp) can be bought from The Airbrush Company (www.airbrushes.com). To find out more about Giorgio Uccellini and his work visit www.giorgio-art.co.uk and turn the page for details of airbrushing workshops with him. 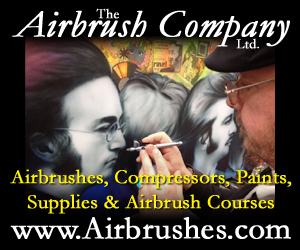 to exist but not transmit feelings of the author. In a way it pretends to be a work that exists independently of reality, carrying the meaning of the abstract. I want to recommend my favorite artists Pierre-Auguste Renoir, Frida Kahlo, Roberto Matta Gabino amaya cacho and Pablo Picasso.