How to Create Contrast in Graphite

How to Create Contrast in Graphite

I find choice of material to be very important and have used the Caran d’Ache Grafwood pencils for the past six years after being given one to try by my local art shop. These pencils range from 4H to 9B, with the 9B producing a very rich black tone. The benefits, that I have found, of using the Grafwood range are consistency of tone; a harder range of graphite, right down to 9B; very smooth to use – I have never found grit in a pencil; the pencils are also tonally painted, which makes it very easy for me to pick up just the grade of pencil I want to use without having to look for the number stamped on the end. I also use the 9B Grafcube, which basically is a solid stick of the graphite used in the 9B pencil. Although this product was designed to be used on its side, I basically use it like a big pencil, removing the corners from one end of the stick and then rounding the corners off. This is great for blocking in large areas such as backgrounds. 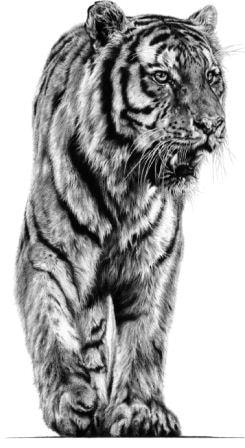 Other items I use include a modified screwdriver, the crosshead end having been ground to a point. The closest thing that I have found to this tool is a dart – a cheap pack of darts can be purchased from your local sports shop, then just dull the tip slightly with a file. I also use the Caran d’Ache grey putty rubber. It is a good idea to keep the rubber in your free hand as this will warm it up and make it pliable. When a putty rubber is new I find it takes a bit of kneading to work the rubber in – this also keeps the rubber clean by dispersing graphite within the rubber and making it very pliable. The paper I use is Fabriano Artistico 300 gsm HP as it is the only paper that I have found that will take the punishment of the engraving technique that I use. I always work from reference photographs that are roughly the same size as the picture I want to produce, finding that it is much easier to gauge proportions. Other photographs are used for close-up reference to provide more detail. 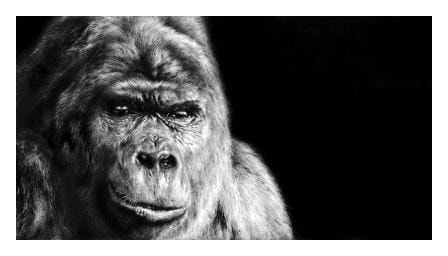 Contemplation, Caran d'Ache Grafwood pencils, (20x35cm)
With this picture I used strong contrast to combine the darkness of the Gorilla with the black background, a closely cropped composition and offset subject was used with the main focus being on the Gorillas expression.

The initial outline is produced using a very blunt H pencil with a minimal amount of pressure, as this will not indent the surface of the paper and allows me to make changes to the drawing easily, whereas a sharp pencil will always leave a visible mark in the paper no matter how careful you are. With elephants I find it useful only to put in the very prominent wrinkles at this stage as it can become very confusing to look at and I will then add finer wrinkles as I start to add detail. When I am happy with the proportions of the animal, I tidy up the drawing with the putty rubber. I find it important to put a black background in at an early stage as this will help me to gauge the level of contrast in the picture. To block in the background I use the 9B Grafcube, as it is great for covering larger areas; I hold the cube like a pencil and press firmly in a circular motion to work the tone into the paper. As I get closer to the outline of the animal I switch to a 9B pencil to get virtually to the line, again pressing firmly in a circular motion; a sharp 2B pencil is then used to finish up to the line as it will produce a sharper edge than the 9B.

Shading is now applied using a blunt 2B pencil very lightly applied in a circular motion and then using a blending stump to soften and spread tone, as this will start to give shape to the picture. The putty rubber can then be used to create fine highlights by first moulding it into a point and then lightly picking out the areas I want to highlight. I find it important to put prominent wrinkles in first and then slowly add finer ones. For finer wrinkles I lightly use a 2B pencil to put some tone onto the paper and then use a sharp 4H over the top pressing firmly to engrave the wrinkle into the paper. Then, making the putty rubber into a blade by pinching it at one end, I will lightly brush the rubber over the line to remove any excess tone left behind by the 2B pencil; this has the effect of producing a very fine dark line having used the darkness of the 2B in conjunction with the sharpness of the 4H. 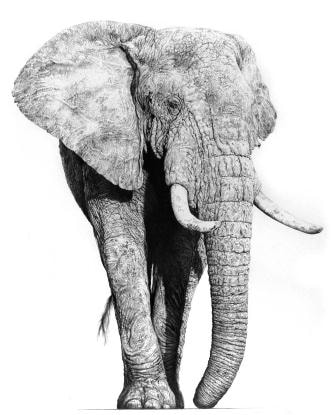 Majestic Thunder, Caran d'Ache Grafwood pencils on paper, 60x43cm
This was a very relaxed pose with the Elephant having real presence about him. Taking over three and a half months to complete the detail extends right down to the areas in strongest shadow.

Texture is added to the paper using the screwdriver tool mentioned earlier to engrave detail into the paper. For the elephant in my demonstration (see below) I used the screwdriver with a firm pressure to engrave tiny figures of eight into the paper to create the texture of the skin; various grades of blunt pencil can then be used over the top in a dabbing motion to create the effect of skin. For areas in shadow I first apply tone to the paper before engraving, and then use 2B and 4B pencils over the top to create the effect of very subtle detail. It is worth practising this technique on a piece of scrap paper to see how much pressure you need to apply. This is how I did the fine eyelashes over the elephant’s eye, except that I worked in straight lines rather than figures of eight. Finally, I go back into the picture with a 9B pencil to exaggerate darker tones, and a putty rubber to lighten other areas, to make a stronger contrast. The background then needs to be tidied up with the 9B Grafcube to finish. Black backgrounds can be very striking and give a picture a lot of impact, but remember it is very important to do the background at an early stage to be able to maximise the contrast needed. 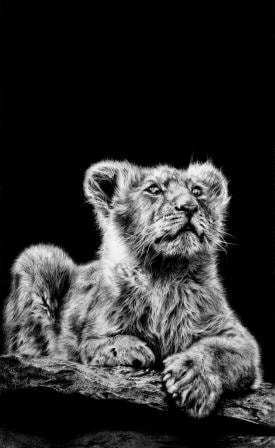 Prince of Darkness, Caran d'Ache Grafwood pencils on paper, (34x55cm)
I find choice of subject to be very important. This Asiatic Lion Cub had a great character and was just the right age with his adult fur just starting to grow, which gives him a really scruffy appearance. 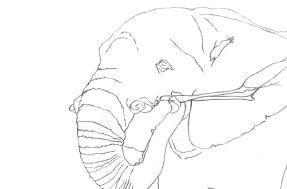 For the initial drawing I used a very blunt H pencil. When I was happy with the proportions of the elephant I used a putty rubber to tidy up the drawing 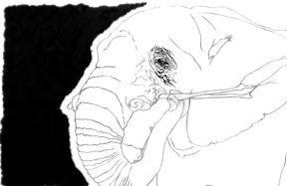 Some of the background was then blocked in with the 9B Grafcube, by pressing firmly. I then started to add wrinkles and shading around the eye. Some of the thicker wrinkles were added with 2B and HB pencils 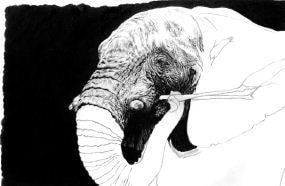 Using the screwdriver, texture was added to the wrinkles. Various grades of blunt pencil were then used over the top to create the effect of the skin texture 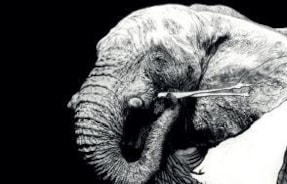 For areas in strong shadow tone was applied before engraving texture into the paper. To do the sticks the elephant is holding I simply used a blunt 2B for the darker areas in shadow and a sharp F pencil for the finer, lighter detail 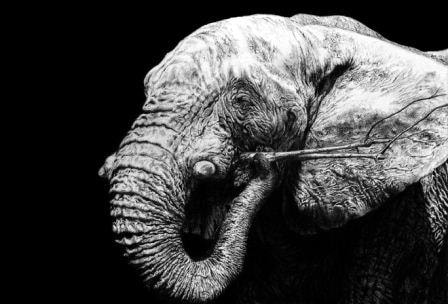 Dark Energy, Caran d’Ache Grafwood pencils on paper, (20x30.5cm)
Finally I used a 9B pencil to darken some areas and a putty rubber to lighten others to give the picture more impact

For information about where to buy Caran d’Ache Grafwood pencils and other products, contact the UK distributors, Jakar International, on 020 8445 6367, or go to www.jakar.co.uk

Jamie Boots is a self-taught artist who works solely in graphite pencil. He first exhibited in 2004 and has won a number of awards for his artwork and his drawings have become highly collectable. Many of Jamie’s pictures are available as limited-edition prints in galleries throughout the UK. For more information see www.jamieboots.com. 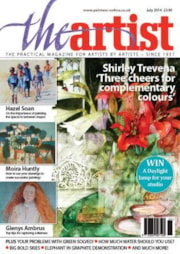 Click here to purchase a digital edition of this magazine 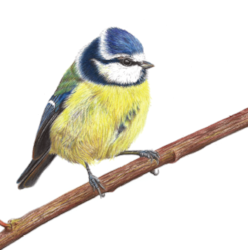 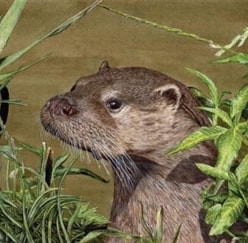 How to Paint an Otter in Watercolour 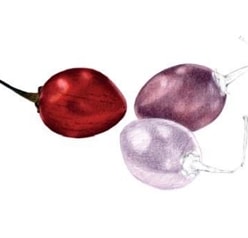 How to Paint Botanical Arrangements

art maintains that reality has already been expressed and the themes of it have been exhausted in relation to art. Therefore, the need arises for a new way of perceiving reality. to recommend my favorite artists Pierre-Auguste Renoir, Frida Kahlo, Roberto Matta Gabino amaya cacho and Pablo Picasso.

Hi Jamie I'm from Australia, I absolutely love your drawings/pictures in graphite, I myself love working in this medium and have taken out a couple awards at our local field day I do animals Trains birds old vehicles and have done a couple portraits. I am looking forward to the July The Artist, I am self taught also. If you wish to reply to this please use my email address [email protected] Thank you LOVE your work Val