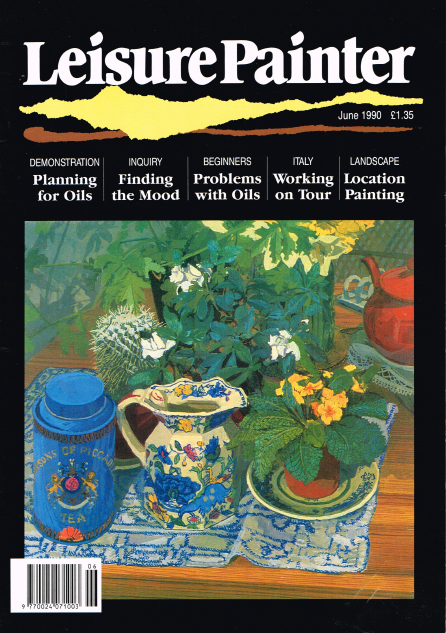 Bonfire on the beach

I intended that this demonstration should be of a harbour with boats, water reflections and quayside interest. What I offer, however, wouldn’t really classify as a marine painting. Experienced painters know that subjects too exactly preconceived are formula paintings and lack the intuitive contribution necessary to any work of art.  I offer, then, as my demonstration The Last Rites of a Clinker Boat, an imaginative composition. I shall explain how the choice of motif was made, as much as I shall describe the process of making the painting.

I have developed a weekly routine which I refer to as my ‘sketching walk’. I sketch at other times, but this is specially set aside. It is little more than a days loiter, never far from home, but free from responsibilities. It isn’t even as purposeful as its definition suggests. The only conscious artistic effort I make is to ‘draw’ with my eyes, while my hand simultaneously records what I see. Judgements are not made about pictorial suitability, neither are the reflex drawings edited or assessed for quality. It has become my form of mental relaxation; but the sketches produced are prolific and serve as a source of ideas.

Reflex drawings record incidents that are fragmentary and normally forgotten within minutes. They gain emotional impact with the distillation of time and even retain the memory of colour. I am best able to describe, in diary form, the kind of visual recall I gain from my reflex sketchbooks.

31st October
Calm after a week of rough seas. The tide is out. Stoop-backed beachcombers search among the driftwood. On Cobb Beach, the heaped wreckage of a dinghy. The serrated lettering of its Weymouth registration declaim it was clinker built and individual. 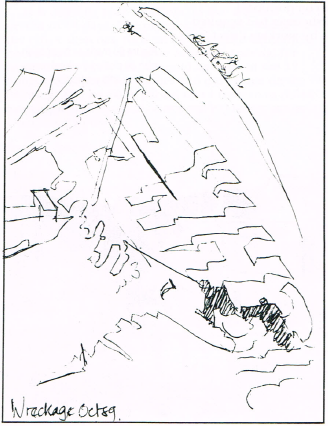 7th November
A high tide. The light is oppressive and strange. Little boats dotted about the harbour. My clinker boat has been burnt, its ribbed carcass blackened. Smoke still rising. 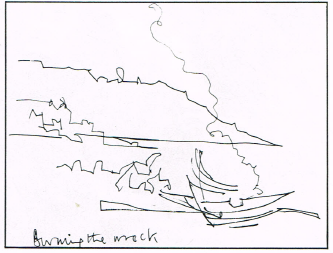 Figure 2
Burning the Wreck.  Ink 3½” x 4½”. The remains of the bonfire of the wreckage on Cobb Beach. It was a dullish day with close tones, no shadows and little air movement. The ebbing spring tide left reflections in the wet sand.

14th November
The spring tide is at its lowest ebb. I move warily beneath the drunken angles of boats. Ribbed patterns in the sand, everywhere. I ease my way over offshore rocks for a frontal view of the town. Buildings mirrored in the shallows. Close tones, pearly light.

28th November
Strong shadows and sharp blue sky. I have brought watercolour to underpaint my sketches. A dog and a man with a camera exploit the damp exposure of the shore. 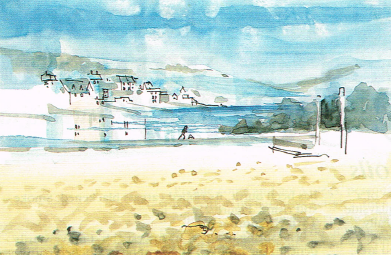 Figure 3
Empty Harbour.  Watercolour 5½” x 8½”.  A man with a camera and a dog were walking along the shore during a last walk among the boats.

That is the evocative effect of the drawings that filled two sketchbooks, A4 and A6, on the four days. They have no recognisable value as drawings, but to collate this material I assumed that an obvious boat theme would emerge; but the wistful boat wreck took precedence. Hindsight had given it a strong emotional and symbolic impact. The usual procedure after a motif has been chosen is to embark upon further research, make detailed drawings, colour sketches, collect references and photographs. I felt the need to recall the living bonfire, although I had only experienced it by suggestion. My choice was illogical, my material meagre, but I have found intuition to be a reliable teacher. 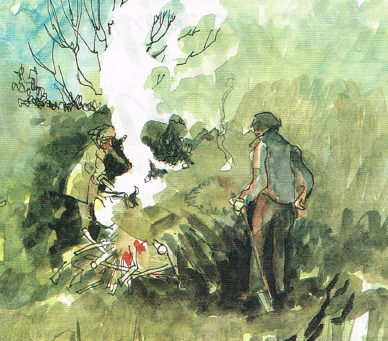 To help me in my research, my family lit a garden bonfire. It was a damp, dark afternoon and I was cold by the time it really caught fire. I spent no longer than 25 minutes on two colour sketches, Figures 4 and 5, but it was enough to show me how figures relate to a fire and for me to observe its tonal effects. 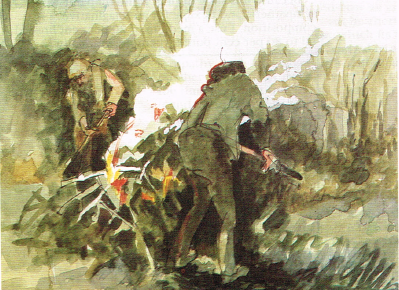 Figure 5
Stoking the Bonfire. Pen, ink and watercolour 7¼” x 9¾”. These sketches showed me how to relate figures to a fire.

I plotted the focal areas – the broken edge of lettering at the fire’s centre, the beach reflections and the column of smoke. The posts to the right and the water reflection to the left would vertically balance the landscape’s strong horizontal. I took my plan to the beach. I noted, in colour wash, the heavy sky against the surprisingly blue sea and detailed a section of trampled sand. I also checked details of scale. Casual passers-by were noted for their height against the landscape. 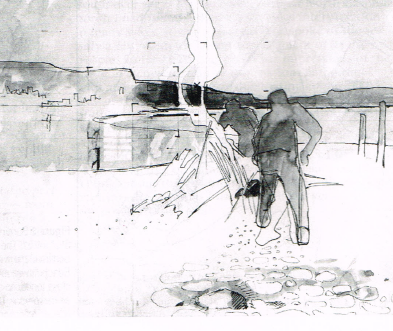 Figure 6
I made a composition plan by plotting the focal areas. Pen, ink and watercolour 6½” x 8¼”

Because it is slow drying. I find oil paint sympathetic and flexible for an imaginative composition. I use a medium of 20 percent linseed oil to 80 percent pure turpentine, gradually increasing the oil content as the painting progresses until it reaches a 40 percent/60 percent balance. The palette I chose for this painting consisted of cadmium yellow, raw sienna, cadmium red, alizarin crimson, cobalt and cerulean blue. I used flake white and no black, preferring to create my own from complementary colours. I stained an 18” x 11” canvas board with a green made from yellow, cobalt and a touch of red, rubbing the colour well into the grain with a rag. The basic shapes were outlined with a number 4 round hog hair brush in a denser version of the same colour. I was ready to begin.

The underpainting was blocked in quickly as flat shapes, working contrasting areas of light tone against dark. The foreground was graduated from dark at the bottom edge to light. The main focal areas of the fire, the shoreline reflection and the column of smoke were established as extreme points of tonal contrast. 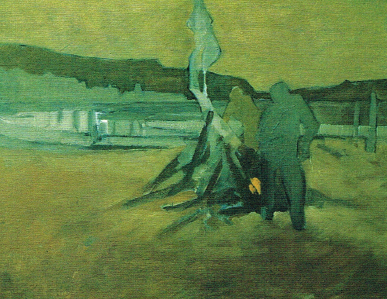 Figure 7
Stage one of the painting in which I quickly blocked in the underpainting in flat shapes.

I worked quickly, in lighter tones over the whole surface, allowing the dark underpainting to show through. By this method I unified the colours as the painting progressed and contributed to the textural quality. I had given special attention to the foreground in the first stage, so that the gradated tone would act as a key to recession. This particular foreground depends upon a perspective of texture, since it has no other device to establish its horizontal plane.

With size 4 flat and size 8 filbert brushes I built upon the underpainting with large open strokes at the bottom edge, gradating to denser smaller strokes towards the top. The town and hill now underwent a counterchange of tone. Light from the buildings was introduced into the hill and darker tones added to the town. The broader structures of wreckage were also painted. 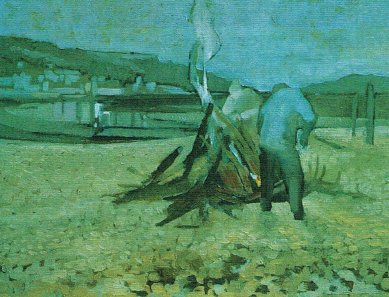 I liked the idea of a sharp intensity of flame and wondered how much warmth the further figure should borrow from the fire. It was a temptation to overstate a situation that would normally be modified by daylight. I was really aiming for a filtered winter light, without shadows and close in tone. I worked over the surface of sand again. It is possible to detect all three stages in one. 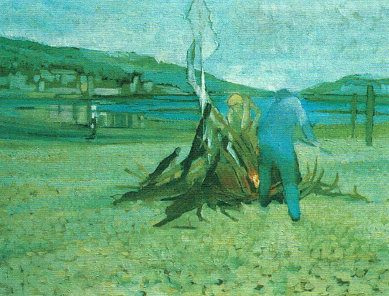 Figure 9
Thirdly, I worked over the surface again, aiming for the effect of a filtered winter light without shadows and close tone.

The figures were proving to be difficult. Their lines of direction drew attention away from the focal point. I finally decided that the further one was unnecessary and would have to go. With a palette knife, I scraped down and repainted the total section between the hill top, the near figure and the wreckage. Not only was it a compositional improvement, the solitary fisherman had acquired poignancy. I completed him by working direct from a model. His pose was altered to give an inward lead towards the focal point of fire. I then painted the area of rocks and reworked the beach to the right-hand side, dropping and lightening the posts so that they related to the ground. I enjoyed painting the broken rib-cage of wreck, working a counterchange of light tone against dark in order to give it form. The highlights of fire were added, then areas of foreground beach were lightened to give horizontal perspective. The painting was left to dry and finally at stage 5, with a size 2 sable brush I painted the marine registration – W.H.3. 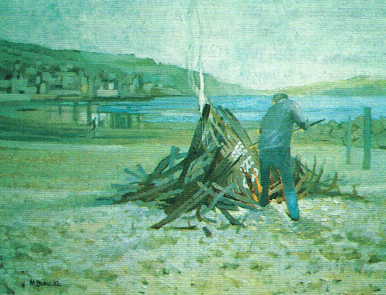 Figure 10
In the final fourth and fifth stages I scraped down and repainted areas and added the marine registration W.H.3 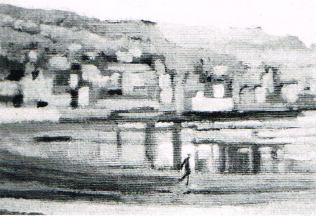 Figure 11
Detail of the town and shoreline area showing the use of the ‘alla prima’ technique in which paint is applied direct and unworked.

Techniques vary across the surface of the painting. The detail of the town and shoreline areas, Figure 11, illustrates the use of a ‘alla prima’ method, where paint is applied direct and unworked. I used single strokes with a flat headed brush to suggest the buildings. The underpainting and staining of the canvas can be clearly seen around the edges of the shoreline and in the spaces of the reflections. The bonfire detail, Figure 12, illustrates the use of the impasto technique where short, brief brush movements were used to create the texture of sand. The sky still retains the scumbled effect of thin lighter paint over dark; but most of the paint has been used opaquely, one colour blended into the next. 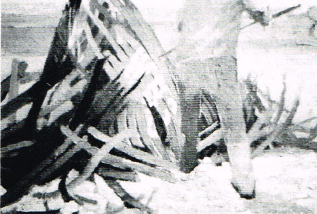 This painting took 17 hours, in five sessions, over a period of 15 days. The preparatory work, including the reflex sketches, took an approximate extra three hours. Had there been more available material for research it is likely that I would have spent the 17 hours on preparatory sketches and only three on the painting! The research period that I refer to as reflex drawing is fundamental to my work.  I never ignore what it has to tell me. 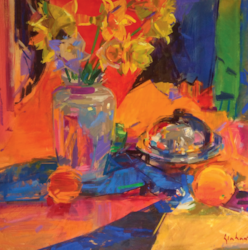 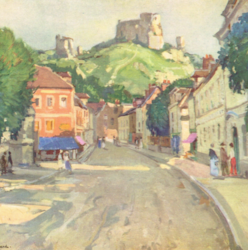 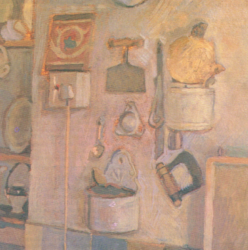 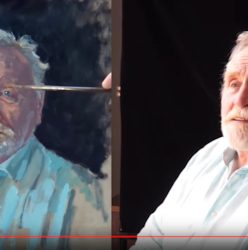 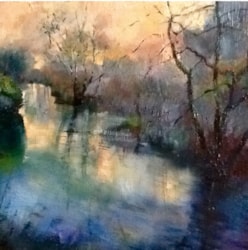 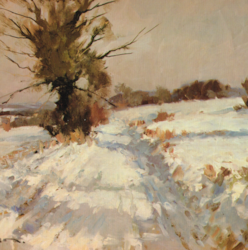 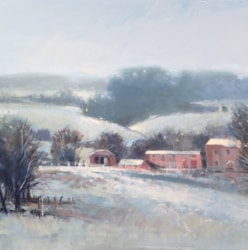 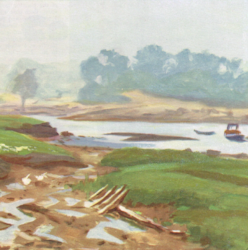 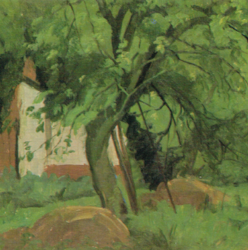