Drybrush appears when less pressure is applied to a brush. It can make a painting appear more spontaneous. I’m not the greatest fan of this technique as it is often overused in the wrong place, but it is useful and in the right hands is exciting.

It depends for its effect on the texture of the paper, so it follows that the rougher the surface being worked on the better it will work. It is the complete opposite of lost and found as it draws attention to itself wherever it appears, so I tend to use it in stems and branches, which are an important pattern change to the flowers, and avoid it in backgrounds. When you want it to happen (because it often happens when you don’t), the important thing to remember is to dry the brush off completely before picking up a wash that is quite liquid. Then I have to rehearse the stroke a couple of times over where I want it to be before actually applying the brush to the paper.

Once the mark is made, it needs to be left completely alone to let the paint settle on the tops of the ‘hills’ of the paper. If you go back and fiddle with it, the paint will be forced into the ‘valleys’ and the effect will be lost. In landscape, drybrush is often used to create sunlight sparkling on water and textures on rough surfaces. I have often used it to paint people with a spontaneous appearance as you only get one chance to get it right. 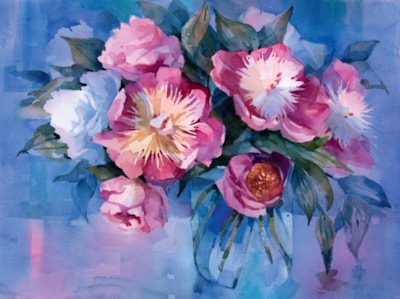 ‘Sarah Bernhardt’ and ‘Bowl of Beauty’ peonies are two of my favourite flowers. They are challenging to paint for a variety of reasons, one of which is the complexity of the petals, which require a great deal of simplification to be painted impressionistically. I spend a lot of time with my eyes half shut blocking out detail. To contrast with the voluptuousness of the flowers I painted the stems in the pot drybrush, to capture a feeling of lightness. All of the watercolour techniques described in these articles were used in this piece as well one that hasn’t, which is the use of body colour (titanium white watercolour, permanent white gouache and white liquid acrylic ink) mixed with the colours for highlights and translucent lighter washes. There are no rights and wrongs in painting – if it works, do it

Also known as knocking back, this technique has saved many of my paintings from the recycling bin. It can emphasise the drama, making a painting more interesting.

Thin washes of watercolour are applied over whole areas of the painting to subdue their importance and to reduce the impact of hard edges. The nature of watercolour is such that if the painting has been dry for sufficient time (I usually leave mine for a day) and the colours used have a high staining quality, the colours underneath the glaze stay put, but are softened. A glaze will also reduce the tonal contrast in areas where the difference between light and dark has become too great and the area is drawing unwanted attention to itself.

To illustrate this technique I rescued some tatty plastic berries and leaves that had been discarded by a friend. I have no idea what they are supposed to be but I love their colour. 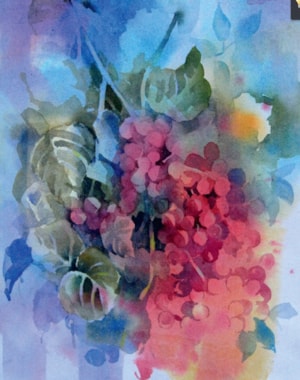 I worked on the painting in my usual way, with an underpainting, then finding the shapes both positively and negatively. I didn’t want to describe all the berries and leaves as that would have been too literal for me, but in my enthusiasm to keep the painting loose I ended up with a great splodge of red paint at the bottom and a lot of (almost) white paper. Many painters like to leave areas of the paper white but in my own work the starkness of it can be overpowering. In my enthusiasm I had also cut out a yellow leaf on the right-hand side which drew a lot of attention to itself 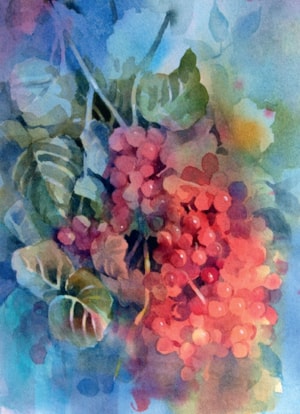 I left the painting for about a day. Coming back to it with fresh eyes, I screwed up my courage and mixed thin washes of both manganese blue and ultramarine blue (Daniel Smith). I washed these all over the sides and bottom of the painting, softly defining the bottom of the bunch of berries and pushing the middle of the painting towards me. After much heart searching I also washed over my yellow leaf. It’s still there but isn’t shouting at me so much. Tiny white highlights on some of the berries were painted with white acrylic ink, and coloured pencils (Caran d’Ache Luminence) were used for final defining marks. 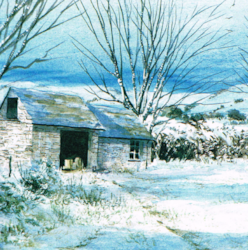 Paint a snowscape in watercolour with William Wheeler 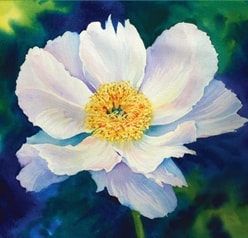 How to paint a white peony in watercolour with Gwen Scott 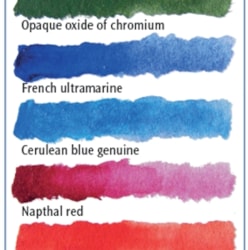 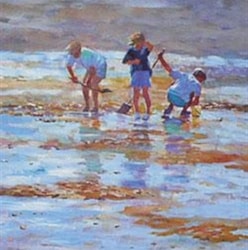 How to Glaze Your Artwork with Jackie Simmonds