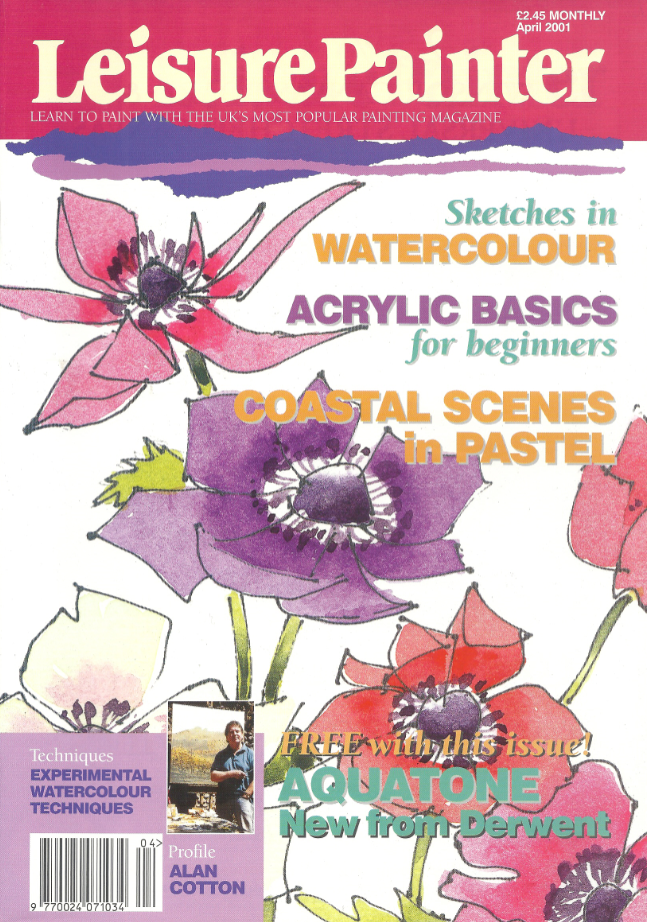 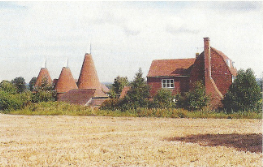 This photograph of Kentish farm buildings, while superficially attractive, is far from being a perfect composition and it is clear that considerable changes need to be made if it were to form the basis of a satisfactory painting.  Let us start by looking at these shortcomings and the changes I made in order to overcome them.

The first problem was the strong unbroken horizontal separating the foreground stubble from the scene above. My solution was to introduce a farm track, which effectively broke this hard line and also provided much needed foreground variety. It had the added advantage of leading the eye into the heart of the painting.

The proximity of the horizon to the half-way mark was dealt with by the simple expedient of lowering the horizon. We could of course have raised it, but as the sky was quite a lively one and the stubble foreground lacked interest, lowering the horizon seemed the better option. I decided to make much more of the line of distant blue-grey hills and, as you can see, they feature far more tellingly in the painting than they do in the photograph, their cool tones making a pleasing chromatic contrast with the warm colours of the farm buildings.

You may notice that I have slightly altered the angle of the farmhouse on the right of the painting. If you look at the photograph you will see that the dormer windows appear to be looking straight out of the picture, carrying the eye of the viewer with them, a fault which the altered angle corrects.

The trees in the photograph are all of similar height so I have made a conscious effort to vary their size – a change that adds interest to their composition. The large tree on the left also acts as a ‘stop’ and keeps the eye on the painting. I planned my sky so that there would be an area of cloud shadow behind the oast houses – a ploy that enables their white cowls to register more effectively. At the same time I simplified the cloud formations so that the softer, smoother treatment would contrast better with the busy scene below and not compete with it. The foreground shadow, cast by a tree situated out of the picture, helped to break up the expanse of foreground stubble and here I went one better and introduced a second, rather larger, shadow.

The colours in the photograph are not as subtle as I remember them on the ground: the reds of the buildings and the greens of the foliage are a little hard and lacking in variety. I therefore looked for colour variation wherever I could and you will see hints of green on the lower courses of the tiled roofs and some warmer tones in some of the trees and hedges.

So much for the changes I considered necessary. I wonder if yours were along similar lines of whether you found entirely different solutions. 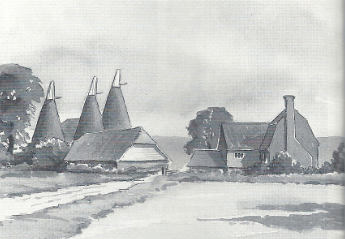 Before starting on my painting, I made a quick monochrome sketch incorporating my ideas (see above) and, when I was satisfied with this, drew in the main features with a 2B pencil on my watercolour paper (Arches 300lb Rough). If you are not sufficiently confident to draw directly on your support, always make a sketch of similar size first and transfer this, if necessary by tracing, onto your paper.

Changes and alterations on your watercolour paper can do considerable harm and jeopardise the purity and clarity of subsequent washes. I do no more drawing than is absolutely essential and never outline trees or bushes, rather leaving their complex forms to lively brushwork. Where subtle perspectives are involved some careful drawing is, however, necessary.

Now for the painting. I began by masking the oast house cowls as it would have been tricky to paint round their precise shapes while applying full liquid washes to the sky. These washes were three in umber:  a pale one of raw sienna for the lower sky and, further diluted, for the sunlit clouds; a mixture of French ultramarine and light red for the cloud shadows; and a blend of French ultramarine and Winsor blue for the upper sky. I let these washes merge together but preserved a few hard-edged highlights here and there.  The cloud shadows were largely horizontal, decreasing in strength and depth as they approached the horizon, to suggest the perspective of the receding cloud formations.

For the tiles and brickwork of the farm buildings I used various blends of raw and burnt sienna, light red and burnt umber, with touches of green (raw sienna with a little Winsor blue) to suggest moss and algae. The shadows were mainly French ultramarine and light red, with the addition of burnt sienna to indicate reflected light. I left the weather-boarding centre barn white as I felt this would provide a crisper note than the brown in the photograph. I also increased the size of this barn so that it would contribute more to the composition.

The two taller trees went in next and for these I used raw sienna, a touch of burnt sienna and Payne’s grey, with a stronger mix of the last two for the shadowed area and the branches. Only then did I paint the blue grey distance, using a mixture of French ultramarine and light red, adding a touch of raw sienna lower down where decreasing distance would lessen the greying effect.

When these washes were dry, I added an impression of distant woods and hedges in French ultramarine and light red.  Most painters tackle the distant scene before the foreground and leave unpainted areas for the buildings and trees. This is fine for the straight lines of the buildings, but less satisfactory for the outlines of the trees. Painting the trees first enables one to employ free brushwork to capture the broken outlines. It is then a simple matter to apply the wash for the distant hills safely right up to the outlines of the buildings and foliage.

Shadows play an important part in painting buildings and help to give them a three-dimensional appearance. It is worth waiting until the sun is in the optimum position to produce the most effective shadows, as I did when taking the photographs.

I painted the hedgerows very loosely, varying both height and colour as I did so. The colours were various blends of raw and burnt sienna, Winsor blue, plus Payne’s grey for the shadows. The sandy-coloured farm track was pale raw sienna with some soft horizontal shading in French ultramarine and light red. This left just the foreground stubble, which presented something of a problem, as any attempt to paint individual stalks would have led to over-complication and over-working. I finally decided upon a broken wash of dilute raw sienna with a touch of burnt sienna and, when that was dry, I added the tree shadows in French ultramarine and light red, allowing the roughness of the paper to play its part in producing broken outlines. This completed the watercolour. 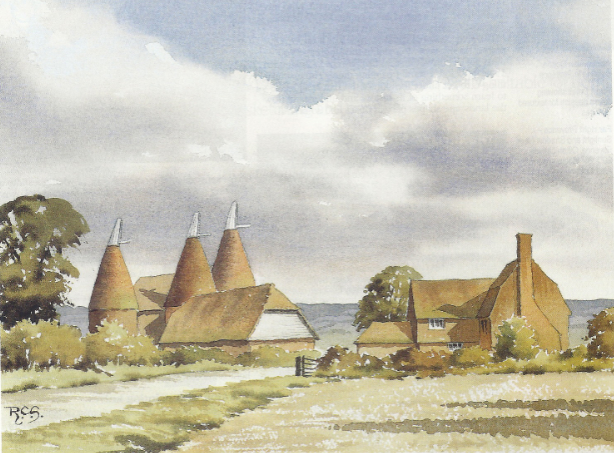 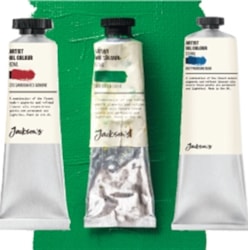 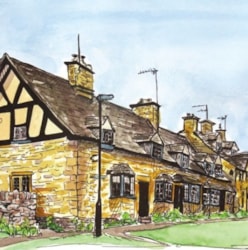 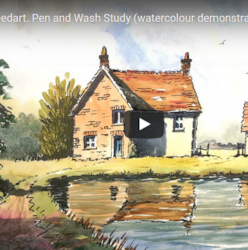 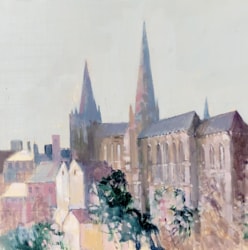 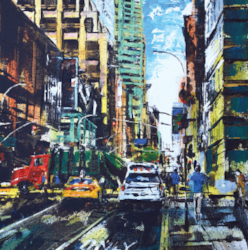 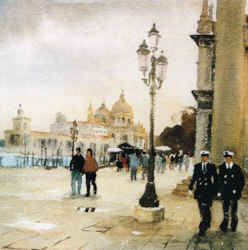 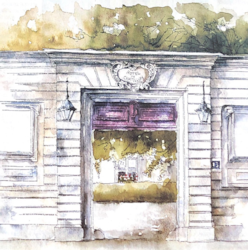 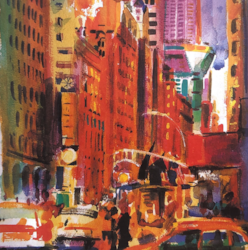 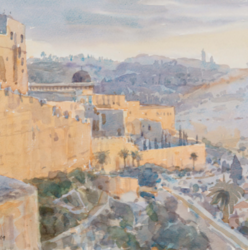