The best brushes for acrylic - our easy guide

The best brushes for acrylic - our easy guide

Jackie Garner
Find out more about this Gloucestershire-based wildlife artist and her work by visiting www.jackiegarner.co.uk or email [email protected] Read Jackie’s blog at garnerwildlifeart.wordpress.com

A guide to acrylic paint brushes

Mostly we use brushes to apply acrylics, although alternative tools are available.

These are the main acrylic brush shapes to consider:

So named because this brush looks round when viewed end-on.

The bristles taper to a point, allowing the artist to produce strokes of varying widths. Sizes vary from Nos. 00000 (or 5/0) to about No. 20. The larger the number, the larger the brush.

Like a Round, but with much longer bristles, the Rigger is used for making long, thin lines.

Imagine your Round brush has been flattened at the end. The longest bristles are in the centre and the shortest at the sides so the tip becomes a rounded shape. The more pointed shape is sometimes called a Cat’s Tongue brush.

Like a filbert, the flat’s bristles are all the same length. It is also called a One Stroke brush. Both filberts and flats can be numbered 0, 1, 2, 3 and so on, or in fractions of an inch. The latter refers to the width of the bristles, not the length.

Like a flat, but the bristles are arranged at an angle, shortest on one side, longest on the other.

As the name suggests, the bristles are arranged in a fan shape. It is also known as a blending brush, referring to its original purpose. I recommend hog’s hair for this brush. 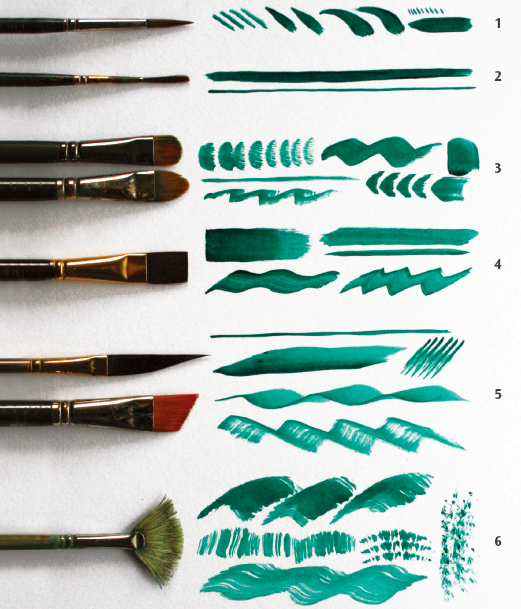 Any of these brushes are available as natural (animal) hair or synthetic. For acrylic painting, synthetic brushes are usually best, as their robustness stands up better to the rigours of acrylics. Save your beautiful sables for watercolour. 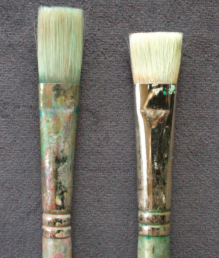 Acrylic brushes have either a long (12in.) or short (6in.) handle. Your choice comes down to personal preference, although I find shorter handled brushes more suited to small paintings.

These brushes are both No. 8, but the bristles are different lengths. Shorter bristles give more control, while longer bristles enable expressive brushmarks.

If in doubt, buy larger brushes. They will be more useful than tiny ones. 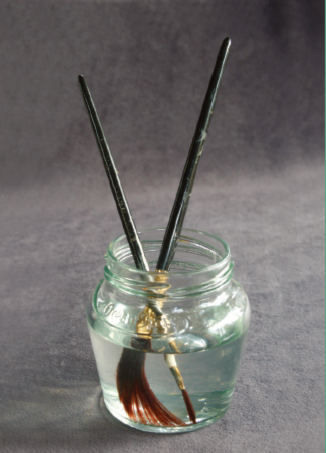 How to care for acrylic brushes

If your brush came with a plastic tube over the bristles, discard that, as it’s only to protect the brush until the first use. Never try to put it back over the bristles; it will stop the brush from drying evenly and likely cause some bristles to splay out, spoiling the brush.

1. As acrylic paint dries quickly, it’s vital to clean your brushes, or other tools, promptly. Wipe any excess paint off the brush onto a newspaper or rag. Wash the brush until the water runs clear, ensuring there is no paint at the base of the bristles then wipe the brush on a piece of kitchen roll to remove excess moisture, reshape if necessary, and leave to dry.

2. Store the brushes in a brush case if you don’t plan to use them for several days.

3. Important: do not leave your brushes standing on their bristles in water. There are two reasons for this:

Moisture seeps into the wooden handle. This expands and cracks the varnish, which may flake off and loosen the ferrule (the metal part of the brush).

The point will become misshapen and unusable.

For more great advice on acrylic painting from Jackie see her series in Leisure Painter, starting in the January 2021 issue. Click here for details and to purchase.

Click here for a great guide to watercolour brushes by Tony Paul.

A bamboo brush case protects your brushes and allows the air to circulate so damp brushes dry naturally. 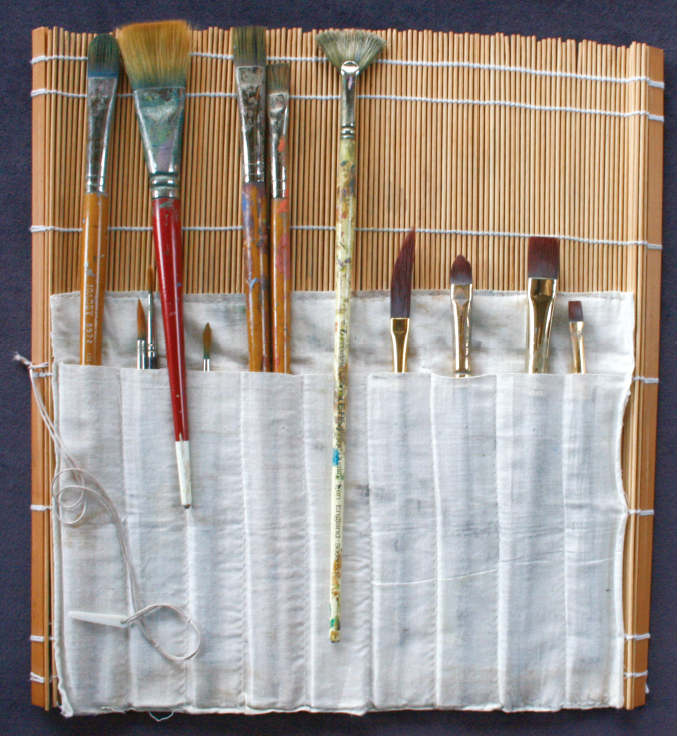 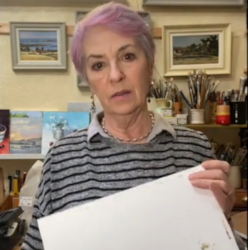 How to make and prepare surafces and boards for oil painting 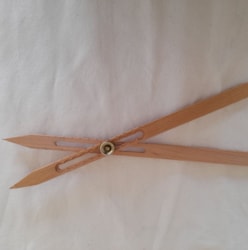 The proportional divider with Mo Awkati

How to use a Slip Mount with Cotswold Mounts

Different types of Mount Board

How to mount pictures quickly and efficiently 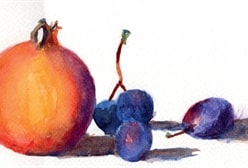