Painting in the Lake District, John Cooke has developed techniques for capturing the effects created by midwinter snow which he shares below.

'When the first falls of winter whiten the tops of the hills surrounding my studio I feel a stirring of excitement and adventure. True, snow can be an inconvenience and a danger, but it is also a challenge and it lends drama and adventure to the most prosaic of landscapes. It has been an inspiration to poets, composers and painters throughout the ages.

'Snow isn’t all pristine whiteness and blue skies however. Sometimes it powders the ground allowing rich, dark colour to show through. Eventually it thaws and becomes grey with pools of water reflecting the sky. Even in sunshine it holds a variety of colours in its shadows and brightly lit areas'.

How to paint snow drifts 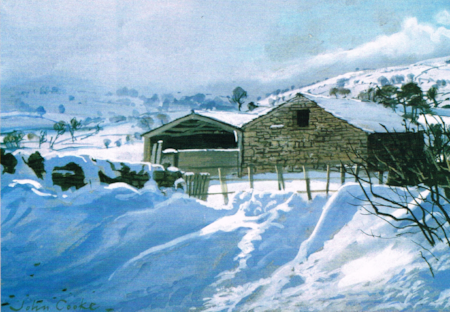 My desire to paint the snowy landscape comes from both the physical enjoyment of activities in the snow and an aesthetic awareness of the changed scene – in general the landscape becomes a negative of its normal appearance, with dark sky (whether blue or grey) and light ground. Try putting a dark wash over the top half of a sketchpad. A few darker smudges for trees and you have a snowscape (above).

Figure 1, above, shows the effect of wind on deep snow and the wonderfully sculpted shapes which can result from this phenomenon. The angular shapes of the barns and their dark warmer colours accentuate the flowing lines of the drifts, the edges of which are picked out in light from a low morning sun.

Although the sky has a hint of blue, to the left storm clouds obscure the hillside threatening more snow. The painting is in gouache, as are most of the works illustrated, and I have exploited its watercolour qualities, to paint washes and allow colours to merge in the storm clouds. Thicker paint, sometimes straight out of the tube, gives the crisp quality of the sunlit hill to the right and in the foreground.

How to paint sunshine on snow

In complete contrast, in Figure 2, below, the bright snow is in thin lines caught by the sun, the rest being a blue-grey shadow.

The trick is to make the shadow look like snow out of direct sunlight, rather than some differently coloured substance. I find that a blue, say an indigo or cobalt toned down by warmer browns or ochres, does the trick.

The large areas of green and brown colouring give the painting a warm feeling and contrast sharply with the high snowfield.

A point to note here is that normally the stream would have had the brightest highlights but with the sunlit snow above, the water had to be toned down a little to give the snow greater strength.

A few wispy clouds add to the feeling of settled weather. 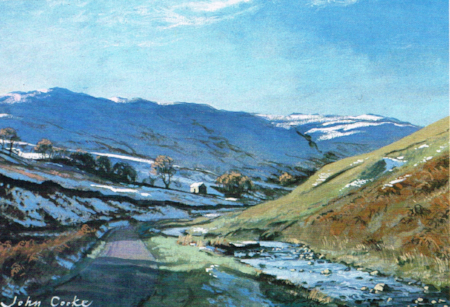 How to paint shadows on snow

When the snow lies ‘deep and even’ it makes a natural screen for shadows to pattern.

Figure 3, below, consists only of a wall and a small tree as subject matter, but their strong shadows create a balanced design together with the distant clouds which show up the outline of background hills.

The clouds are edged with light (a little raw sienna or ochre helps the feeling of diffused sunlight) but this was played down to enhance the light on the walltop snow and the foreground field.

Many of my paintings are on a mid-grey tinted paper and playing down a colour simply means thinning the gouache a little to allow the grey to show through. 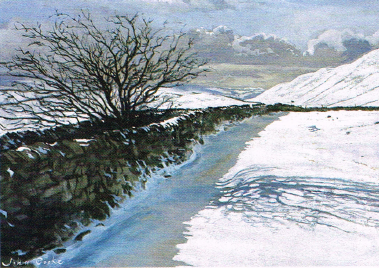 How to paint snow-covered buildings

Buildings and snow always go well together. The dark colours of stone or brick emphasise the whiteness and this in turn frames the angular shapes of walls and gable ends.

In Figure 4, below, most of the foreground is a flat area of fresh snow and the interest lies in surface details such as footprints, the line of a kerb and windblown snow, plus the pattern of sunlight and shadow. 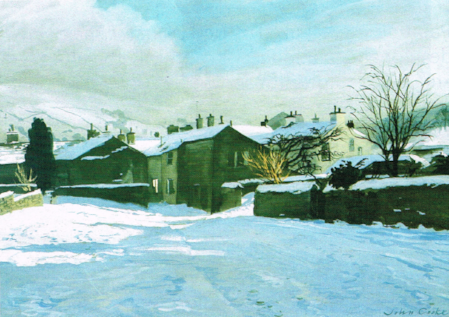 Here the shadow colour has been warmed in places with raw sienna to give the effect of reflected light from the sunlit areas catching certain parts of the snow. The variously angled rooftops offer a pattern of light and shade also.

Note the counterchange of the two right-hand trees and the warmth the sunlit tree introduces to the dark central area.

In the alleyway, a window reflects light from the low winter sun.

How to paint the contrasts of light and dark

An example of reserving white (or a white lightly tinted with a sunny ochre or raw sienna) for the highlights is shown in Figure 5, below, – the painting of a cattle grid at the top of the Buttertubs Pass above Wensleydale.

Here the snow is a deep mauve colour against a late afternoon sky with only the top edges of ridges of snow catching the light, together with an icy patch of road as it curls over the descent to Hawes. 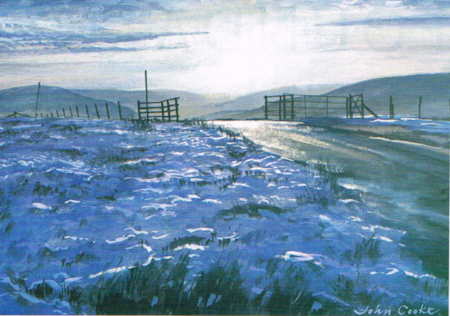 A grey day results in rather more even snow tones. In this case contrast can be found in other ways. Rock outcrops and stone walls break up the snow on either side of the painting in Figure 6, below.

An evening light catches frozen water in the tyremarks in the foreground centre providing the opposite extreme tonally to the blackness of the trees.

I rarely use black on my palette, preferring to mix indigo with a dark brown and/or crimson to achieve a much more interesting darkness which can be varied from warm to cold according to the mix of these colours. 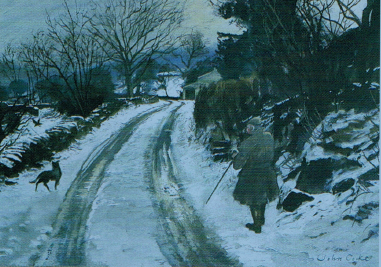 How to paint falling snow

Figure 7, below, shows how snow can pick out the interesting geometric shapes of buildings. It depicts the village roofscape from the side of my studio and a darkening sky shows off the pattern of snow and dark stone to good advantage.

A small lighted window adds a touch of warmth and human interest.

It is rare to be able to depict falling snow successfully but in this instance the large flakes were such an important feature that I painted them in.

Falling snow must be drawn with a sense of perspective: large flakes near to wider spacing and smaller flakes more closely spaced farther away. Against the sky some flakes appear as dark smudges. 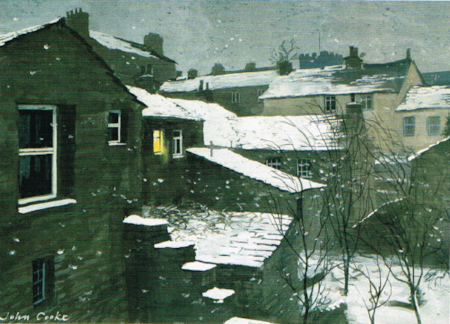 This article is taken from The Artist February 1998 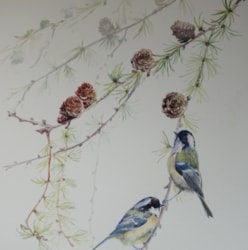 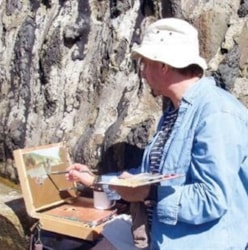 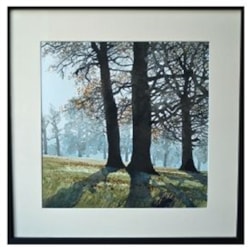 Advice on submitting to open art competitions and exhibitions 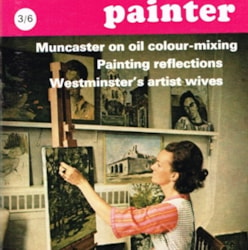 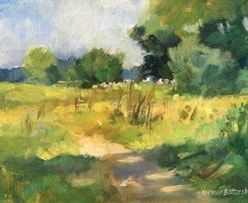 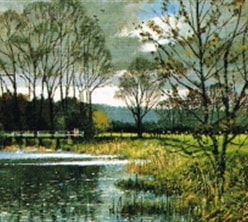 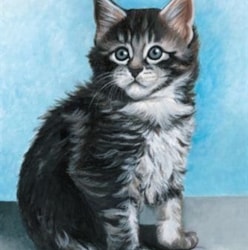 How to paint a kitten in acrylics 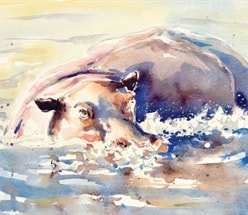 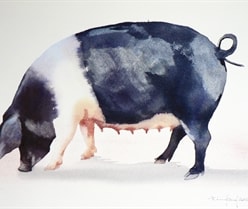 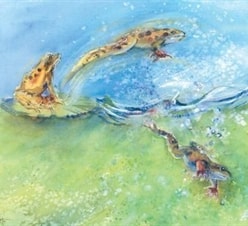