'Grounds are generally supplied in liquid form and, when applied, modify the painting surface, making it receptive to the medium that is subsequently applied,' explains Tim Fisher.

'Working surfaces or substrates, such as paper, wood or canvas, sometimes require additional preparation before painting commences, both to protect the artwork by creating an impermeable boundary with the substrate and to allow the paint to function properly on the surface when applied.

'A large number of painting grounds can be purchased these days that are already pre-coated with some form of universal primer. It’s always worth checking when purchasing a canvas whether it’s primed or not.' 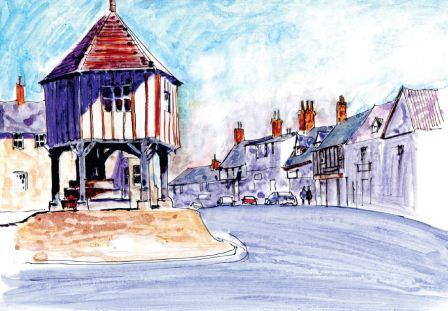 Working on an unprepared substrate

When working on an unprepared substrate, it’s possible to apply a ground that instils properties to make the surface more receptive to a variety of media such as oils, acrylics, watercolours or pastels.

Golden Artist Colours have been aware of this requirement for many years and they provide the artist with a wide range of surface treatments that allow the user to experiment and extend their painting style.

I have just received a Golden Introductory Grounds set.

Each set is acrylic based and contains six 59ml containers that allow different surface applications to be carried out and experimented with prior to painting.

It’s quite important that the substrate used is rigid otherwise some surface distortion can be experienced as the ground dries out. Thinner papers can be used if they are taped down and allowed to dry in situ.

Some of the pots contained grounds that were quite unfamiliar to me and so it was a journey of discovery to find out what could be done with them.

After shaking the bottle, it was poured into the well of a small palette.

After waiting a few minutes for the foam to dissipate, I applied using even strokes onto the reverse side of mount-card with a 3⁄4in. flat nylon watercolour brush.

The ground flattens down and quickly settles into an even surface.

After leaving overnight to set, I was then presented with a smooth, slightly glossy surface to work with.

Silverpoint or Metal-point is a drawing technique that was used extensively during the Renaissance period, both as a method of producing an under-drawing for painting upon, or as a fine line drawing technique in itself.

A draftsman’s clutch pencil into which leads can be inserted is useful for this technique.

Small sections of silver, copper or even gold rod, which is the same diameter as the lead, can be gripped and used to draw with. In fact, any metal type that leaves a mark is suitable for working with. The tip shouldn’t be too sharp as gouging and embossing can occur.

When drawing, minute particles of metal are deposited from the stylus onto the surface, which leaves behind a greyish line. Except for gold, over time some tarnishing occurs, which affects the finished drawing, giving it a feeling of antiquity as the lines change colour very subtly.

Using my silverpoint tool I drew the scene, which eventually became Wymondham Market Cross (above).

The silverpoint produces a uniform grey line. Any mistakes are difficult to correct other than recoating the surface with more silverpoint ground. After the drawing was complete, I applied watercolour washes.

The shiny non-absorbent surface meant that the paint agglomerated as it dried and I felt this would be a difficult approach to build up colour.

I later worked fine felt pen over the silverpoint and applied Artbar to the card.

I then wetted it, which allowed for more colour build up.

Having become used to the behaviour of the surface, I prepared a second sheet.

On this one I drew Back Lane, Ketton (below) in brown fibre-tipped pen, which went onto the smooth ground extremely well.

Using Sennelier soft pastels I then built up the surrounding colours.

I tried a few oil pastels that took to the surface well, though I would recommend using a blender if this approach is employed.

Softer pastel can be applied more easily than a harder pastel. I tried some Pan Pastels and these went on very well, too. 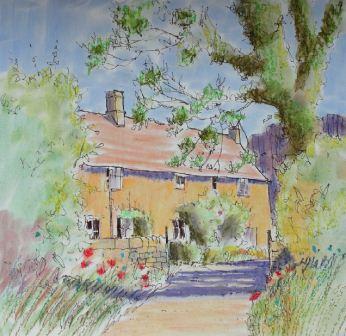 Next I opened the fine pumice gel.

Using a teardrop shaped palette knife I spread the gel liberally over a sheet of MDF.

It left quite a coarse and uneven texture. Being slightly transparent, the colour of the MDF was visible through it, leaving a brown/grey colour.

Once the ground had dried overnight, I drew Tulips using black Indian ink and a fine brush.

The flower heads were painted using a flat brush and a combination of cadmium red and cadmium yellow. The background was mostly yellow ochre and white. The greens were mixed by introducing cerulean blue into the yellow.

To finish, I re-established parts of the black ink outline.

Fine pumice gel has quite a toothy texture and some absorbency, and when applied more evenly, it should also be good for working pastel, coloured pencil or watercolour into it. 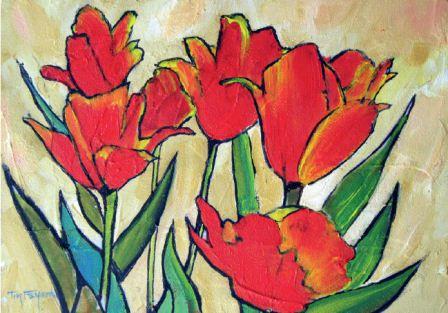 Golden produce a range of pumice gels in fine, coarse and extra coarse

Applied with a palette knife onto stiff card, care must be taken not to apply the ground too generously otherwise it can be difficult to create an even surface.

Using a wetted knife the surface can be worked and flattened out to a finish resembling watercolour paper.

I was impressed by the way the watercolour stayed clean and bright. It granulated nicely in places creating some interesting textures.

I thought this ground made a nice alternative to watercolour paper and was keen to experiment further, producing this little village scene, below. 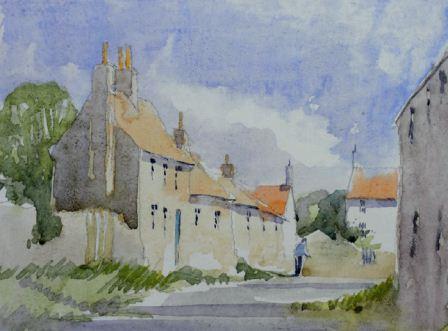 Golden grounds can be premixed with pigment prior to application and this is what I did with the coarse molding paste.

I mixed it in a little cerulean, ochre and purple acrylic prior to applying with my palette knife.

After leaving to dry it formed a hard, toothy surface that was crying out for soft pastel and I produced a coastal scene (see below) inspired by the initial application of the coloured ground.

I was particularly inspired by the foreground textures I achieved. 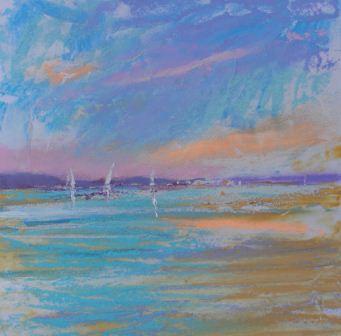 Crackle paste was the next ground to try.

I applied it onto MDF, varying the thickness across the surface.

After leaving it for a period of about 12 hours I was surprised that no crackling had occurred.

After taking advice I placed it on a warm radiator for a few more hours and the cracks started to form as it dried out.

Varying the thickness of the application produced different sized cracks across the surface: the thinner application, the finer the crackles.

This is quite an absorbent surface and takes watercolour well.

I liked the mosaic effect that formed as I painted around the edges of the trees in watercolour. 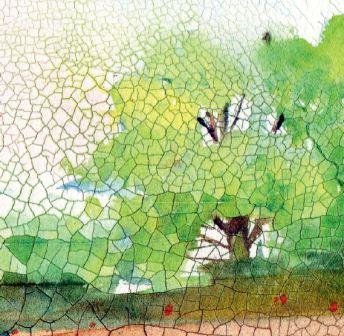 The covering power of this ground is very good.

I used it to paint thickly over an abandoned box canvas acrylic painting.

As the surface dried, the cracks formed evenly, allowing glimpses of the warm colours through the cracks below. I then painted a beach scene using acrylic paints.

Like other Golden grounds, pigment can be mixed in prior to application.

Care must be taken not to add more than ten per cent of paint to the volume as this can have an effect on the formation of the cracks. 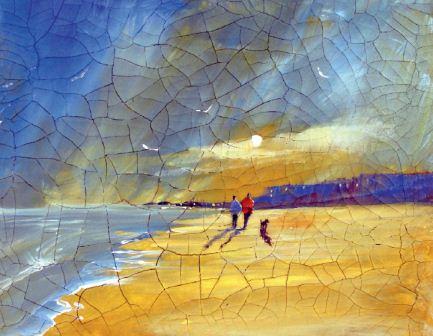 The last medium to try was the acrylic ground for pastels.

I applied it onto mount-card with a 3⁄4in. flat nylon brush. For a nice even application, several coats diluted with water were applied to the surface to give a flat even overall texture.

This ground has some transparency, so watercolour work could be carried out beforehand on hot-pressed paper, prior to building up layers of pastel.

Using Sennelier soft pastels I quickly built up this scene of a country lane.

The coating provides an excellent tooth upon which to build up multiple layers of pastel. 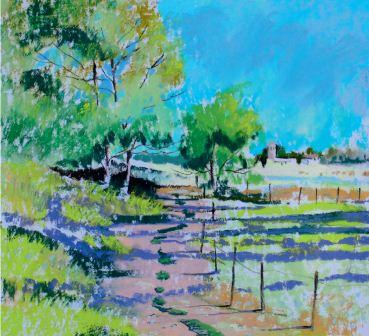 In conclusion, I found that these Golden grounds offered versatility to the user, opening up a number of exciting painting possibilities in terms of texture and form with which to explore further.