This book demystifies all aspects of painting the sea, including details on the form and anatomy of a wave; bringing light, atmosphere and drama into the sky; and choosing colours to create a mood. It also provides a great source of inspiration to artists who are drawn to the sea as a subject for their own paintings. 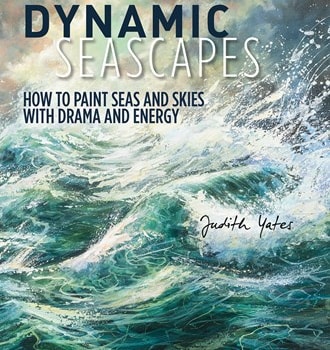 'Social media gets a bad press. However, it was also responsible for the genesis of this book. The publishers of Leisure Painter and The Artist magazines put one of Judiths pictures on Twitter. I thought it looked interesting and decided to investigate further. It quickly became apparent that she is one of the best seascape artists I'd seen for a long time, so I suggested that Search Press might like to talk to her. And here, a couple of years later, we are.

'Water is one of the hardest subjects to paint. Its hardly ever static, has no real substance and no colour of its own, yet it presents in many different moods, almost all of them related to movement and surroundings. So, how do you represent that in a single image? Well, thats what the book is all about. The subtitle is how to paint seas and skies with drama and energy and it has that in spades.

'Working in watercolour, acrylic, ink and mixed media, Judith will show you how to capture all the forms and moods of the sea, from a calm evening estuary to storm-blown waves breaking on a rocky shore. Although water is the primary subject, Judith does not forget the shorelines, landscapes and of course skies that make up a complete seascape. Shell show you how light both affects the appearance of water and is affected by it through refraction and reflection. Shell also demonstrate ways of capturing the solid appearance of a breaking wave and how to create the sense of power and movement that are essential to giving your image a feeling of being anything but static and two-dimensional.

'There are plenty of examples, exercises and demonstrations as well as explanations of the way water behaves in just about every situation. The book is every bit as exciting as its subject.'