Paul Talbot-Greaves critiques the second of his painting challenges for 2017. In the February issue of The Artist, Paul Talbot-Greaves set readers the challenge of editing a photograph from landscape to portrait format, and changing the brightness and saturation before painting the revised scene.

Of the reader versions sent in (both manipulated photograph and finished painting) Paul selected the work of Bob Biggart (see below) for critique saying: 'Great example here Bob, really well done. I like the way you have manipulated the image in order to extract the details, then created a further modified version, tidying up the composition and adding gulls. I don’t see the painting as scruffy like you imply. There’s a nice painterly feel and some good values, the only area of improvement I would suggest needs to be in the rigging. Use either a very fine rigger brush, ruling pen or just an offcut of watercolour paper. Make sure it has a straight edge, apply the lighter paint along it and stamp it in position. The advantage of using watercolour paper is that you can bend it into shape before you use it as a stamp'. 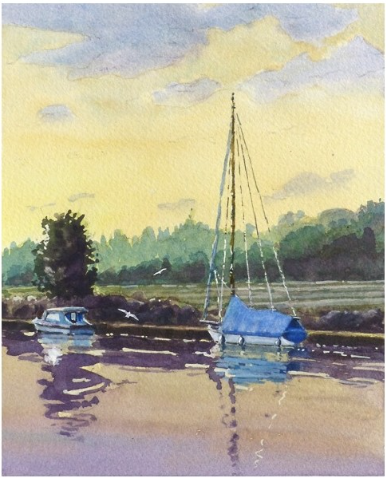 Of the challenge Bob said: 'I imported the original photo into Photoshop Elements, and altered the image in Levels until the details could be seen. I then painted a watercolour from the new image. I made more of the tree line in the distance, lowered the hedge so more field could be seen, left out the ugly lumpy end tarpaulin on the larger boat, modifying the shape, and added a couple of gulls to give a bit of movement to the scene. In all honesty, not one of my best efforts, bit of a scruffy painting, more giving the challenge a go. Maybe one that Paul can get his advisory skills going on. I love Paul’s articles in the Artist magazine … can’t get enough of them.'

You can see all of the reader versions of this challenge in the PaintersOnline gallery by clicking here.

More challenges from Paul will commence in the June issue of The Artist - published April 21.