Bluecoat, Liverpool’s centre for the contemporary arts, is to host one of only eight works commissioned for the Arts Council Collection’s 70th Anniversary this year. Bluecoat, Liverpool’s centre for the contemporary arts, is to host one of only eight works commissioned for the Arts Council Collection’s 70th Anniversary this year.

The commissioned piece, by renowned British artist Keith Piper (see portrait at the end of this article), will be shown as the centrepiece of a major solo show launching this Autumn which will continue into 2017, marking the start of Bluecoat’s 300th anniversary year.

The prestigious commission, which has been brought to fruition in partnership with visual arts organisation Iniva, will celebrate the long-term relationship between Piper and Bluecoat, which began three decades ago when he was at the start of his career.

Piper’s new work for the Arts Council Collection’s 70th Anniversary, Unearthing the Banker’s Bones, will comprise three synchronised high definition video projections (see a still image from the project below). Alongside the film, ‘physical evidence’ will be displayed, playing off against the unfolding narrative of the videos, which employ a science fiction device of reflecting on the present from the perspective of an imagined future.

Piper was part of Britain’s BLK Art Group of the 1980s which fought to raise the profile of black artists through exhibitions and conferences. The group’s campaigning work was part of the impetus of black and Asian artists who contributed to contemporary art in the UK and internationally over the following decades, a contribution whose significance is now being recognised.

Prominent within this discourse, Piper continues to respond to specific social and political issues, historical relationships and geographical sites. Over the past 30 years, he has used a variety of media, from painting, photography and installation to digital media, video and computer based interactivity.

Keith said: “Unearthing the Banker’s Bones is a work emerging out of a period of research into science fiction as a space in which metaphors around social, racial and class anxieties are played out.

“Weaving together references drawn from a diverse range classic novels, films and other texts, I am attempting to employ visual montage to play with notions landscape and history painting to devise a narrative played out across a triptych of video screens. The story that unfolds will be one of exploration, excavation and autopsy as a way of examining the present from an imagined future.” 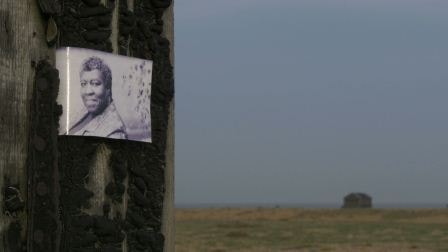 Bryan Biggs, Artistic Director of Bluecoat, said: "Keith's association with Bluecoat dates back to 1985 when he first exhibited here in Black Skin Bluecoat and continued through significant projects like Trophies of Empire in 1992, so we are delighted to see his challenging and vital work achieve such important recognition today.

"We are committed to working closely with artists to develop their work throughout their careers, and are pleased to be collaborating with Iniva to host Keith's most substantial exhibition for some time later this year."

Melanie Keen, Director of Iniva said: “Iniva supports artists at different moments in their careers providing guidance and opportunities to present new work. I first worked with with Keith in 1999 on a major monographic exhibition produced by Iniva so I am particularly thrilled to facilitate this acquisition for Keith as one of my first achievements as Iniva’s new director.

“Securing this commission and a permanent place for Keith’s work in the Arts Council Collection marks a very significant moment in Iniva’s history. The commission is a tribute to Keith’s talent and artistic career which spans three decades. We join Bluecoat, our partner, in congratulating Keith on winning this prestigious commission.”

Jill Constantine, Head of the Arts Council Collection said: “Eight new artworks, in total, have been commissioned by some of the most celebrated artists living and working in the UK today and will be on shown across England during 2016 before becoming a permanent part of the Arts Council Collection. These works will be available for loan to galleries across the country and will enrich their own programmes.

“It has been a real pleasure to work with the artists from the very beginning of the process and institutions like Bluecoat and Iniva to bring these commissions to fruition.”