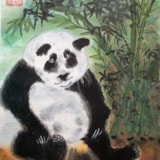 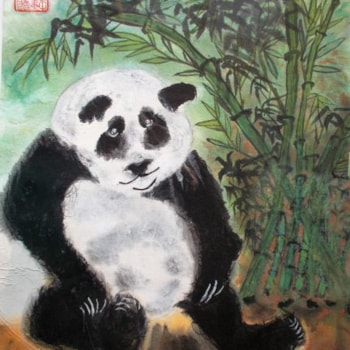 Chinese painting is one of the oldest continuous artistic traditions in the world. The two main techniques in Chinese painting are: Gongbi (工筆), meaning "meticulous", uses highly detailed brushstrokes that delimits details very precisely. It is often highly coloured and usually depicts figural or narrative subjects. It is often practised by artists working for the royal court or in independent workshops. Ink and wash painting, in Chinese shui-mo (水墨, "water and ink") also loosely termed watercolour or brush painting, and also known as "literati painting", as it was one of the "Four Arts" of the Chinese Scholar-official class. [2] This style is also referred to as "xieyi" (寫 意) or freehand style. My love of Chinese brush painting began when I met an artist who had his own gallery in Singapore. His paintings and his skill inspired me into engaging him to provide private lessons starting in 1980. These twice per week lessons had been intensive and hard work. However, I continued painting as much as I could until 1984. My British husband and I decided to reside in the UK. Due to business commitments and subsequent working career, I had to discontinue my painting. Due to serious ill health, I had to stop working to recuperate. During this period, I decided to re-start my love of Chinese brush painting. I took up lots of workshops and classes with local tutors based in Cambridge. Peter Cavacuitti and Jane Evans have provided inspirations and refreshes the techniques that was taught to me in Singapore. I am truly grateful for their encouragement. For the last ten years, I have painted numerous landscapes and places where I had visited e.g. Europe and different parts of UK. Three years ago i.e. 2015, I attended a colour pencil drawing workshop organised by Cambridge District Art Circle. It was truly an eye-opening workshop and I decided to carry on with this alongside with my Chinese brush. Unlike graphite and charcoal pencils, colored pencils’ cores are wax- or oil-based and contain varying proportions of pigments, additives, and binding agents. Manufacturers that began producing artist-grade colored pencils included Faber-Castell in 1908 (the Polychromos range was initially 60 colors) and Caran d’Ache in 1924, followed by Berol Prismacolor in 1938.[8] Other notable manufacturers include Bruynzeel-Sakura, Cretacolor, Derwent, Koh-i-Noor Hardtmuth, Mitsubishi (uni-ball), Schwan-Stabilo, and Staedtler.